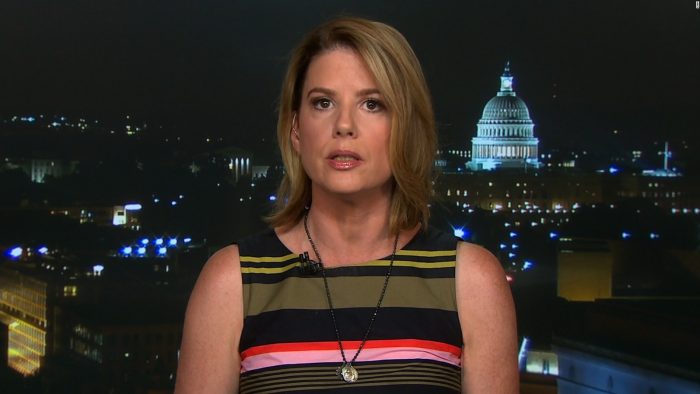 By James Bishop| Kirsten Powers, a columnist and TV political pundit, began her career in 1992 as a Democratic Party staff assistant in which she assisted with the transition between president Bush and president Clinton (1). She continued to work with the Clinton administration for the next six years and then worked for the Democrat Party in various roles.

Eventually, she transitioned to being a full-time member of the political media. She also serves as a columnist to USA Today, Newsweek, The Daily Beast, and was a contributor on Fox News. She has since joined CNN officially as a commentator on August 22, 2016. Some of her work has also appeared in The American Prospect, Elle, New York Observer, Salon, and the Wall Street Journal.

Although she’s now identifies as a Christian we find that Powers once had a very negative view of Christianity when she was an atheist, “just seven years ago, if someone had told me that I’d be writing for Christianity Today magazine about how I came to believe in God, I would have laughed out loud. If there was one thing in which I was completely secure, it was that I would never adhere to any religion —especially to evangelical Christianity, which I held in particular contempt,” (2)

“I derided Christians as anti-intellectual bigots who were too weak to face the reality that there is no rhyme or reason to the world.”

Powers’ mother “was a lapsed Catholic who had no discernable faith” and her father “father was an Episcopalian who took us to church every Sunday.” Her father raised her as a Christian and she tried to believe based on the fact that she admired him so much. But her father soon fell into a dark hole when it came to his belief,

“As I teetered on the edge of disbelief, I called my father looking for reassurance. Instead, he confided to me that as much as he had struggled to believe—and at times had possessed a genuine, but fragile faith—he had come to the unhappy conclusion that God wasn’t real.” Her father’s doubts, however, would have a big influence on her, “I was suddenly untethered, and I felt as though I could barely breathe. But there it was: If my father—the most brilliant man I knew— didn’t believe in Christianity, then it couldn’t be true. And so I fell away, too.”

Thus from within her early 20s Powers “would waver between atheism and agnosticism, never coming close to considering that God could be real.”

After her college graduation her work exposed her to to what she calls an “aggressively secular” peer group that only cemented her atheist views and her contempt for evangelical Christianity. When it came to her love life her friends set her up on dates because she was single and desired companionship. But Powers had one major boundary and that was “No religious people.”

However, to her surprise she found that one man she started dating was in fact religious, “I started dating a guy who mentioned, in passing, that he attended a Presbyterian church. I flinched. But I liked him, and because I was so religiously illiterate, I didn’t understand that some Presbyterian churches are evangelical. I assumed he was a cultural Christian, like the few other Christians I knew.”

The result was some tension in the relationship although Powers continued to have much respect and love for him. He too desired to be with her, “But I warned him that even though I was willing to show up at church from time to time, the chances of me becoming a Christian were less than zero. But it turned out that the church he attended was pastored by a man named Tim Keller, who might be the most persuasive Christian apologist and evangelical pastor of his generation (if not the century).

His sermons would weave together threads from philosophy, history, music, literature, and even popular culture. I had never heard anyone talk about the Bible, or Jesus, the way Keller did.” Keller’s apologetics would have a profound influence on Powers, “Each week, Keller made the case for Christianity. He also made the case against atheism and agnosticism. He expertly exposed the intellectual weaknesses of a purely secular worldview. I came to realize that even if Christianity wasn’t the real thing, neither was atheism.”

Powers then began to realize that there was some evidence in favour of Christianity and that this was something that she only started to notice for the first time, “About a year into this unlikely journey I came to the conclusion that the weight of evidence was on the side of Christianity being true. But this was a head decision, not one of the heart. Shortly after arriving at that conclusion, I went on a business trip to Taiwan.

During the travel I prayed fervently that God would reveal Himself to me, though I didn’t really understand what I was asking for. And then one morning I awoke from a dream in which Jesus had come to me and said, “Here I am.” I was overwhelmed and frightened because the experience was so real… I tried to write off the experience as misfiring synapses, but I couldn’t shake it. When I returned to New York a few days later, I was lost. I suddenly felt God everywhere and it was terrifying. More important, it was unwelcome. It felt like an invasion. I started to fear I was going crazy” (3).

But when Powers called back home to tell her boyfriend this good news he ended their relationship, “I called my boyfriend, half a world away, but before I had a chance to tell him, he broke up with me. I can see now that his purpose in my life had been fulfilled, but at the time it was quite a shock, if for no other reason than the fact that he was the only Christian I really knew well.”

But Powers really wanted to share this experience with someone who would listen, and so she reached out to a friend, “Who was I going to talk to about this dream? I ended up reaching out to a Christian I had met through my (now ex-) boyfriend and uncomfortably recounted my dream to him. He himself had become a believer through a dream and insisted that I needed to join a Bible study.

So I took a breath and headed to the Upper East Side Bible study my friend had suggested. I wish I could remember exactly what was said that first day, because as I stepped out onto the sidewalk after the meeting I was overwhelmed by the truth of the Gospels.”

And what followed would prove to be one of the most joyous moments in her life,

“I’ll never forget standing outside that apartment on the Upper East Side and saying to myself, “It’s true. It’s completely true.” The world looked entirely different, like a veil had been lifted off it. I had not an iota of doubt. I was filled with indescribable joy.”

1. Proslogion. 2016. Kirsten Powers: Another Atheist Who Became a Christian.Available.