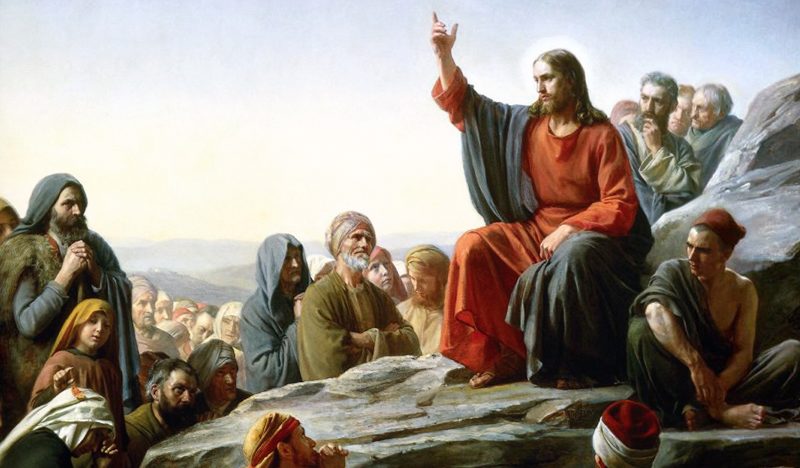 By George Mitrakos| There exists many whose goal is to diminish the Church’s faith in the truthfulness of the Biblical narrative by stating that these could not have possibility been penned by the earliest disciples of Christ for the simple reason that Jesus and his disciples spoke only Hebrew/Aramaic.

Although it is indeed true that the Disciples of Christ, along with Jesus himself, spoke these languages, it has been proven to be a foolish task to attempt to limit the tongue of the Saviour from the other common languages spoken within the Roman Empire at that time.

Greek was the common language within the Roman Empire

As we know from history, Israel was strongly subject to Roman rule during the time of Christ’s earthly ministry. Furthermore, another thing which we know is that the common language spoken by those within the Roman Empire was indeed Greek and Latin. Greek was also adopted by anyone who stood in the positions of the political class and by those who had a desire to communicate or do business with the Romans.

In other words, it was the universal language of that time and hence was deemed to be a very desirable skill to acquire.

Katherine Clark who is the author of a book called “The Orthodox Church” writes on page 28 of her work that the Greek culture predominated during Christ’s time among educated Roman citizens of the empire of whatever nationality.

Furthermore, she compares the Greek’s influence in the Roman Empire to the dominance of our English language of today. She called it the “Linqua Franca” of the Hellenised Jews and other intellectuals within the realm of Rome.

The Septuagint was the first translation of the Hebrew Bible into Greek; and was made in the third century B.C. by 70 scholars who were direct descendants of those trained in Ezra’s Great Synagogue of Jerusalem. This translation was commissioned by the Egyptian king Ptolemy II Philadelphus for the purpose of it being an addition in his Library situated in Alexandria.

“This translation became very popular among Jews in the first two centuries before Christ because many Jews in those days did not understand Hebrew. Their ancestors had left Israel centuries before, and generation after generation gradually lost the ability to read the Scriptures in Hebrew. Jesus and the Apostles: studied, memorized, used, quoted, and read most often from the Bible of their day, the Septuagint.

Since Matthew wrote primarily to convince the Jews that Jesus of Nazareth was indeed their promised Messiah, it follows as a matter of course that his Gospel is saturated with the Hebrew Scriptures. Yet, when Jesus quotes the Old Testament in Matthew, He uses the Hebrew text only 10% of the time, but the Greek LXX translation—90% of the time!”

The Gospels quote from the Greek translation of the OT

Here are SOME the places where Jesus and the disciples are seen as quoting from the Greek translation of the OT:

“And the scroll of the prophet Isaiah was given to him. He unrolled the scroll and found the place where it was written,“The Spirit of the Lord is upon me, because he has anointed me to proclaim good news to the poor.  He has sent me to proclaim liberty to the captives and recovering of sight to the blind, to set at liberty those who are oppressed, to proclaim the year of the Lord’s favor.” – Luke 4:17:19

Evidence from the crucifixion 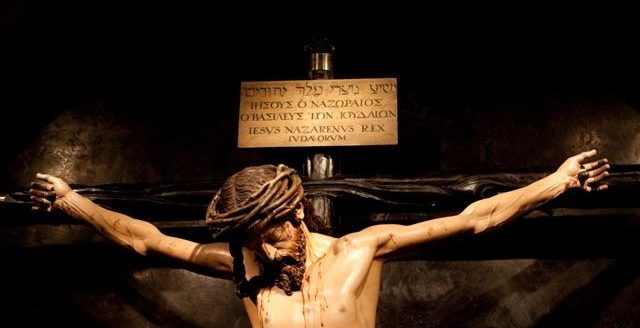 Many may wonder why I quote the biblical story of the crucifixion as a means to support the claim that Jesus spoke Greek. Well, I am not. What I am going to do, however, is use the crucifixion to demonstrate that a significant number of people who were present within the crucifixion’s locale spoke at least one of the following languages:

Seeing as this is pretty self-explanatory, I can almost guarantee that many of you know what my argument is going to be. That is, the sign that was placed upon Jesus’s head while he was nailed to the cross. This is what the notice said:

“Pilate also wrote an inscription and put it on the cross. It read, “Jesus of Nazareth, the King of the Jews.” Many of the Jews read this inscription, for the place where Jesus was crucified was near the city, and it was written in Aramaic, in Latin, and in Greek.” – John 19:19-20

“There was also an inscription over him, ‘This is the King of the Jews.'” – Luke 23:38 *Some manuscripts add in letters of Greek and Latin and Hebrew.

The reason why this is so significant is because if Greek or Latin were not spoken within the empire, then what would be the purpose of even rendering them in these 2 languages? The obvious reason is that it was done so for the means of enabling EVERYONE within that locale to understand what was penned on the notice.

The disciples speak to Greek people 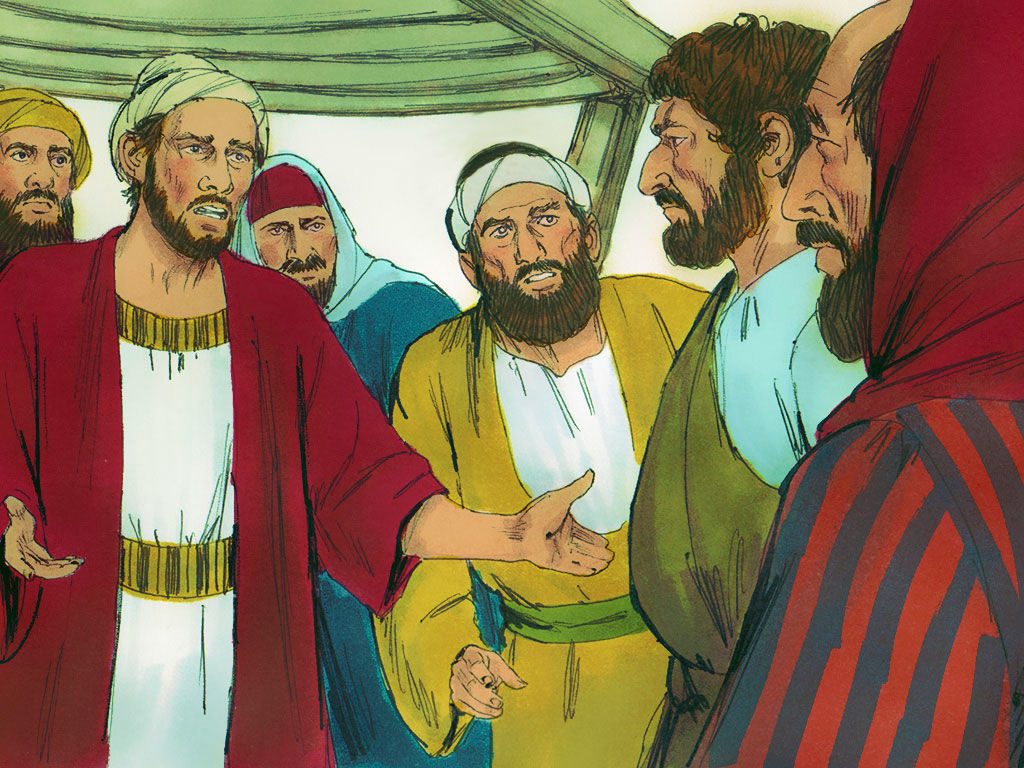 “Now among those who went up to worship at the feast were some Greeks. So these came to Philip, who was from Bethsaida in Galilee, and asked him, “Sir, we wish to see Jesus.” Philip went and told Andrew; Andrew and Philip went and told Jesus. And Jesus answered them, “The hour has come for the Son of Man to be glorified.” – John 12:20-23

In this event, we see that some Greeks came to Philip desiring to speak to the Messiah. Now there is NO indication that this communication happened in the Hebrew tongue. In fact, the Gospels mentioning of the nationality of these individuals is probably emphasizing the fact that this communication did happen in the Greek language.

Another interesting thing which can support this claim is the fact that they came unto the feast, one of which was only customary to the Jewish people. In other words, these were Greek speaking Jews.

According to Barns notes on the bible, he states:

In fact, Jamiesson Fausset and Brown’s commentary stand in full support of Barn’s second possibility of the identity of the mentioned Greeks:

Greeks—Not Grecian Jews, but Greek proselytes to the Jewish faith, who went to attend the annual festivals, particularly this primary one, the Passover.

Hence even if the disciples did not commune with them in Greek, we still have evidence that Greek speaking Jews existed within the Roman Empire.

As Paul was about to be brought into the barracks, he said to the tribune, “May I say something to you?” And he said, “Do you know Greek? Are you not the Egyptian, then, who recently stirred up a revolt and led the four thousand men of the Assassins out into the wilderness?” Paul replied, “I am a Jew, from Tarsus in Cilicia, a citizen of no obscure city. I beg you, permit me to speak to the people.” – Acts 21:37-39

Within the above passage, it is important to note that when asked if Paul speaks Greek, there exists an absence concerning the answer. However, Paul goes on to commune with him and answers this fellow’s inquiry.

It is indeed pretty clear and self-explanatory that Paul answered the tribune in Greek. This is further supported by Ellicot’s commentary of the Holy Scriptures, stating that this verse points to the evidence that Jerusalem was familiar with both of these languages.

Canst thou speak Greek?—The chiliarch apparently expected his prisoner to have spoken Hebrew, i.e., Aramaic, and was surprised to hear Greek; the people expected Greek, and were surprised at Hebrew. Nothing could better illustrate the familiarity of the population of Jerusalem with both languages.

“Now there is in Jerusalem by the Sheep Gate a pool, in Aramaic called Bethesda, which has five roofed colonnades.” – John 5:2

“And at the ninth hour Jesus cried with a loud voice, “Eloi, Eloi, lema sabachthani?” which means, “My God, my God, why have you forsaken me?” And some of the bystanders hearing it said, “Behold, he is calling Elijah.” – Mark 15:34-35

One of the more clear evidences which exist to support the belief that the Gospels were actually penned in the Greek language are found within such passages as the ones mentioned above. The question we need to ask ourselves is the following:

“If the biography of our Lord was indeed originally painted in the Hebrew/Aramaic tongue, then why include translations of certain Aramaic and Hebrew phrases?”

In other words, the presence of translations within the biblical narrative demonstrates to us that the original readings were penned in a different language then what is commonly proposed. If not, then there would be no need in saying things like “In Aramaic it is called this and this Hebrew phrase translates to that”.

To conclude this article, let us go through a quick overview to see what we learnt. We saw that:

What we see is that the New Testament narrative falls in complete harmony with the culture of the Roman Empire, and we have good reason to believe Jesus and his disciples spoke Greek in some degree.