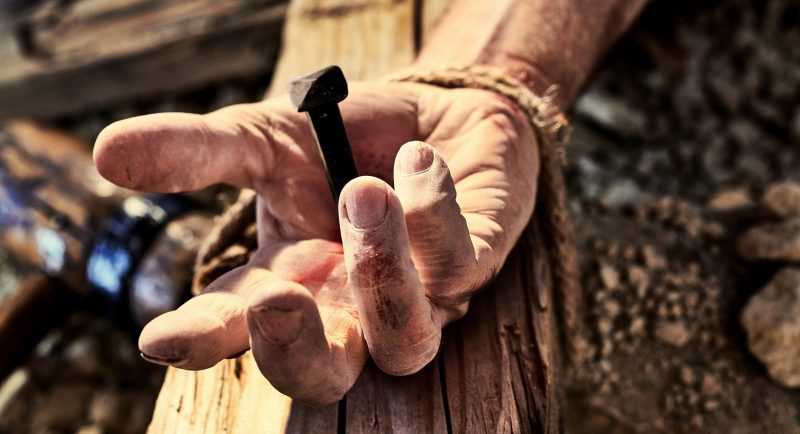 By James Bishop| Most Muslims do not believe that Jesus Christ died by crucifixion, and the primary reason for this is the Qur’an’s rejection that Christ had been crucified or killed (4:157). Scholar Michael Fonner explains that “This view is held not only within popular Islam but among mainstream Islamic scholars” (1).

20th century scholar of Islam and translator Abdullah Yusuf Ali (1872-1953) penned that “The Qur’anic teaching is that Christ was not crucified nor killed by the Jews” (2). According to the Qur’an:

“they [the Jews] said (in boast), ‘We killed Christ Jesus the son of Mary, the Messenger of Allah’ – But they killed him not, nor crucified him, but so it was made to appear to them, and those who differ therein are full of doubts, with no (certain) knowledge, but only conjecture to follow, for of a surety they killed him not – Nay, Allah raised him up unto Himself” (4:157).

This sura forms the foundation of the predominant Islamic view that Christ, as a prophet and messenger, did not die but instead “was raised body and soul to heaven.” For the purposes of this post, we are not concerned with the theological views, Islamic or Christian, but instead with the historical record.

Where the latter is concerned, the Qur’anic view presents a radical departure from academic scholarship where no credible, mainstream scholar within relevant fields of expertise questions that Christ had been crucified and died as a result.

“ONE OF THE MOST CERTAIN FACTS OF HISTORY IS THAT JESUS WAS CRUCIFIED ON ORDERS OF THE ROMAN PREFECT OF JUDEA, PONTIUS PILATE”. (P. 162)

“JESUS’ DEATH AS A CONSEQUENCE OF CRUCIFIXION IS INDISPUTABLE”. IN THE RESURRECTION OF CHRIST: A HISTORICAL INQUIRY, 2004, P 50

The crucifixion is independently attested in no less than 11 independent sources from both within and outside of the New Testament: Pre-Mark Passion Narrative, Q, John, Paul, Hebrews, 1 Peter 2:24, Clement of Rome, Ignatius, Martyr, Josephus Flavius, & the reliable Roman historian Cornelius Tacitus. Pre-Mark and Q are very early dating to within years of the actual crucifixion.

Other later, less valuable, sources such as Lucian, Mesa Bar Serapion (depends on dating), Thallus and the Talmud

Christ’s death and crucifixion is one of several historical events held by the most skeptical historians within the field, even those who reject Christian theology (3). It is also, according to many historians, the strongest fact of Christ’s life reasoned to upon historical grounds given its satisfaction of the historical method; these include: early attestation, independent attestation, and the criteria of embarrassment and coherence (readers are directed here for a closer examination of these evidences).

The crucifixion is one of “two facts in the life of Jesus [which] command[s] almost universal assent” and “rank[s] so high on the ‘almost impossible to doubt or deny’ scale of historical facts” (4). James Dunn’ reference to just two facts (the other being Christ’s baptism) deliberately presses the envelope to the extremities of fringe skepticism.

This is deliberate as a means to show that even if one were to come to the historical record with the most skeptical possible outlook (which most historians would suggest is unreasonable and is not the appropriate approach to any historical text, even those that deserve a good deal of skepticism) certain things can still be known with reasonable certainty about Christ.

Most scholars are accepting of and very comfortable with a far lengthier list than just two facts alone. Either way, the Qur’anic rejection of Christ’s death by crucifixion has to swim against a torrent of historical evidences as well as the view of nearly every mainstream scholar in the field. This is certainly a difficult task and one that is unlikely to be achieved on historical grounds.

One common Islamic view of the crucifixion story, as promoted by Ahmed Deedat (1918-2005), was that Christ did not die on the cross and later managed to recover from his injuries (this is referred to as the swoon hypothesis).

Such a view is rightly criticized as unhistorical given the historical and anatomical absurdities it presents; these include Christ surviving his ordeal despite being tortured via flogging, then crucified with nails hammered into his wrists and ankles, hanging on the cross in pain for a few hours, then having his side and heart pierced by a Roman spear to affirm that he was deceased, then carried to a tomb where he was buried.

Deedat’s view would have one believe that Christ not only survived such an ordeal but then managed to escape the tomb himself (or with the help of Nicodemus or Joseph of Arimathea, of whom Deedat throws into the equation for good measure – why would Nicodemus or Joseph conspire with Christ in the first place?), then travel distances on multiple occasions to convince the disciples and others that God had raised him from the dead.

Deedat interprets Mary Magdalene’s visitation to the tomb, which the gospels explain is to anoint Christ’s dead body as per Jewish custom with the deceased, to “massage” (i.e. revive) Christ’s sore body back to life. Deedat’s view is not only unhistorical but too bases itself upon conspiracy.

A conspiracy typically lacks evidential weight in its favour (no primary sources affirm or even hint at Deedat’s interpretive speculations) and typically has its proponent skewing the existing available, yet disagreeable, evidence to conform with his or her perspective. In the abstract to their published article in the Journal of the American Medical Association, Edwards, Gabel, and Hosmer conclude that Christ’s death is beyond a reasonable doubt:

“Jesus of Nazareth underwent Jewish and Roman trials, was flogged, and was sentenced to death by crucifixion. The scourging produced deep stripelike lacerations and appreciable blood loss, and it probably set the stage for hypovolemic shock, as evidenced by the fact that Jesus was too weakened to carry the crossbar (patibulum) to Golgotha. At the site of crucifixion, his wrists were nailed to the patibulum and, after the patibulum was lifted onto the upright post (stipes), his feet were nailed to the stipes. The major pathophysiologic effect of crucifixion was an interference with normal respirations. Accordingly, death resulted primarily from hypovolemic shock and exhaustion asphyxia. Jesus’ death was ensured by the thrust of a soldier’s spear into his side. Modern medical interpretation of the historical evidence indicates that Jesus was dead when taken down from the cross.”

The substitution hypothesis is also popular for Muslims, and claims that it was not Christ who was crucified but someone who “appeared” like him to the Jews and who was killed in his place. Fonner refers to this as the belief “that the crucifixion was an illusion, or that someone else was substituted for Jesus” (7).

To its credit this view does not fly in the face of the historical evidences of a crucifixion but it does deny that it was Christ who was the one crucified. A number of imaginative and speculative substitutes have been proposed in Christ’s place including a Roman soldier, a passing Jew, Simon of Cyrene, Judas Iscariot, Peter or some other unknown apostle of the likes of Tatanus, and Sergius,

That there is deception involved in this scenario will likely raise theological questions on the Islamic concept of God, but such questions are not our purpose here; instead, the major issue historians take with this view is that the available evidences all affirm that it was Christ who was crucified and not someone else.

All our primary sources — the gospel biographies of Mark, Matthew, Luke, and John, the letters of the Apostle Paul, the New Testament texts of Hebrews and 1 Peter (2:24), and Jewish historian Josephus Flavius and Roman historian Cornelius Tacitus — affirm Christ as the victim of a Roman crucifixion, and not some other person. Given this it is almost certain that Christ was crucified, a warranted position to hold in the absence of reasonable historical doubt.

Moreover, what is the historical evidence other than the Qur’an (a text which itself historians do not use to reconstruct first century Christian history given that it was penned some five to six centuries later and seems to have derived information from later gnostic texts) that proponents of the substitution hypothesis cite?

This is usually the Gospel of Barnabas, a text which dates, based on anachronisms, no earlier than the 14th century. A persuasive reason for this date is the year of Jubilee which, according to the Old Testament (Leviticus 25:11), occurred every 50 years. However, around the year 1300 AD, Pope Boniface XIII (1294–1303) declared that the year of Jubilee would be held every 100 years (this was changed again in 1343 when Pope Clement XI (1291-1352) returned it back to every 50 years).

It is then interesting that the Gospel of Barnabas refers to the year of Jubilee being every 100 years, which suggests that it was probably written between the year 1300 and 1343. Importantly, there is evidence of an earlier text also bearing the same name, which is referred to in the Galasian Decree (c. 519-553 AD) and the List of Sixty Books (7th century AD).

However, given the anachronisms of the Gospel of Barnabas used by Muslims to inform their substitution view of Christ’s crucifixion, these are two different texts bearing the same name, with the earlier one referred to as apocryphal (being falsely attributed to someone important; in this case to the original disciple Barnabas of the first century).

The Gospel of Barnabas used by Muslims dates 1300 years after Christ’s life, and cannot be considered a primary, nor a reliable, historical source on the matters of early Christian history. It was also conspicuously authored with the intention of rendering its contents friendly to the Qur’an’s view of Christ’s crucifixion and Islamic theology (note that the Qur’an was itself written 600 years before this text).

It claims that someone, in this case Judas Iscariot, was the one to be crucified in Christ’s place, and that Christ was raised to heaven alive. It is also critical of the Apostle Paul (as are many Muslims; in the case of Deedat, the claim is that Paul invented Christianity and corrupted God’s authentic teachings), includes the Islamic statement of faith (the Shahadah), and more.

These views expressed by many Muslim interpreters of the Qur’an are confronted by numerous (insurmountable) obstacles on historical grounds. These include the concoction of an extraordinary, almost certainly unhistorical, scenario of an individual surviving the rigours of crucifixion to then manage to convince others that he had been resurrected by God from the dead.

Such a view, including the substitution hypothesis, fly in the face of the cumulative primary evidences, all of which affirm that Christ was crucified and killed, and that this was a fate experienced by Christ alone as opposed to some other speculative figure believed to have died in his place.

[First published: 02/24/2017. Updated and Revised: 26/08/2019]. This article was originally featured on the website of James Bishop and was republished with permission from the author, with minor edits.

1. Fonner, M. 1992. “Jesus’ Death by Crucifixion in the Qur’an: An Issue of Interpretation and Muslim-Christian Relations.” Journal of Ecumenical Studies 29, p. 442.

Jesus Vs Muhammad: Their Views About Women

6 Big Reasons Why Islam Is False