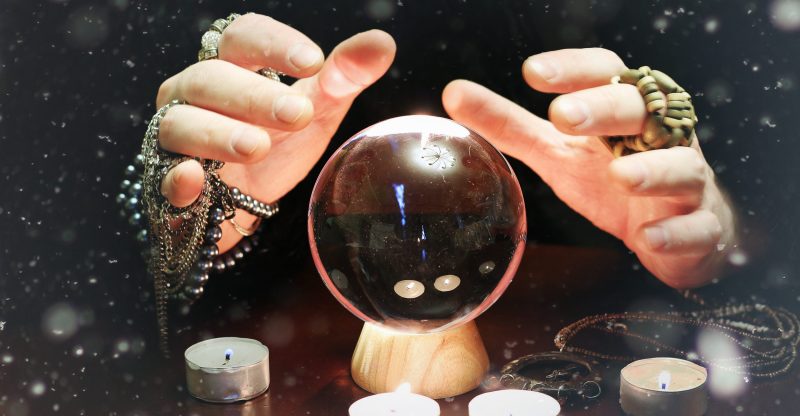 By Steven Bancarz| It’s common knowledge that the New Age movement has a strong foothold on our culture right now.  Bookstores are lined with best-selling titles teaching people how to use crystals, how to meditate and cultivate “higher consciousness”, and how to make contact with spirit guides as people like Jim Carey and Oprah Winfrey continue to push things like Christ Consciousness and meditation on the masses.

Popular teachers like Deepak Chopra and Eckhart Tolle continue to sell millions of copies of books teaching the idea that God is an impersonal force in the universe and that we are to cultivate relationship with this force by shifting our consciousness and practicing things like “mindfulness”, “presence”, or yoga.

This year, Netflix recently came out with a series called “Sabrina the Teenage Witch” complete with spell-casting, incantations, and demonic manifestations right around the same time the makeup company Sephora announced that they would be releasing a witches starter kit for little girls complete with crystals, sage, and tarot cards.

A study found that witches now outnumber Presbyterian Christians in the US by 100,000, with 1.5 million self-identified witches as paganism continues to grow “astronomically”. 27% of Americans identify as “spiritual but not religious”, including 35% of Protestant Christians.  This is one of the fast growing spiritual-religious demographs in the West right now. In fact, the population of those who identify as witches or pagans is continuing to increase as the those who identify as “Protestant Christian” continues to decrease.

We are even beginning to see this emerge in politics as witches have made headline news recently having rituals in an attempt to hex Brett Kavanaugh and Donald Trump by chanting around an alter involving animal skulls and dolls with the faces of the two men on them.  But a new study released on October 1st by the Pew Research revealed something shocking.

They surveyed Americans to see what the thought about the following four New Age beliefs. 1) Spiritual energy exists in physical things, 2) Psychics have reliable insight into the future, 3) Reincarnation, 4) Astrology.

Not only did 62% of the general public hold at least one of these beliefs, 61% of professing Christians held one of these new age beliefs: 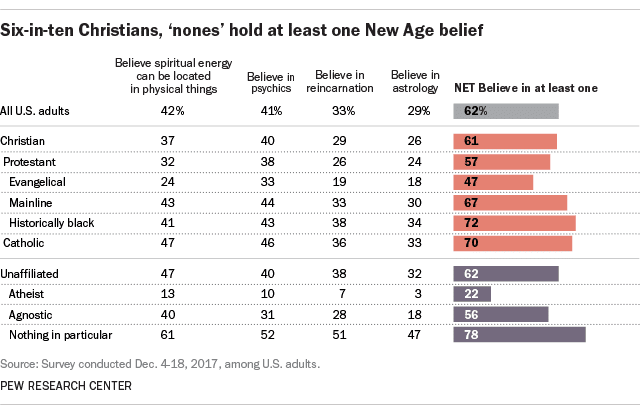 Almost one third of the professing church of Christ believes they will live again in another body in another life on this planet, even though the Bible says in Hebrews 9:27 that “it is appointed for man to die once, and after that comes judgment”.  Reincarnation contradicts the entire Gospel.  We will stand before the judgement seat of Christ.  Four-in-ten professing Christians believes in psychics as a viable means of foretelling the future, even though the Bible repeating condemns this practice:

“There shall not be found among you anyone who burns his son or his daughter as an offering, anyone who practices divination or tells fortunes or interprets omens, or a sorcerer or a charmer or a medium or a necromancer or one who inquires of the dead, for whoever does these things is an abomination to the Lord. And because of these abominations the Lord your God is driving them out before you.” – Deuteronomy 18:10-12

If this isn’t troubling enough, we have to remember that only four New Age beliefs were tested for in this study.  This study did not test for things like pantheism (the idea that God is a force that is present within nature), Oneism (the idea that all spiritual paths lead back to God and are equally valid), Karma (the belief that there is a force in the world balancing the scales of good and evil), or the belief that man is divine by nature.

If we were to take other such New Age beliefs into account, it is a conservative estimate that at least 80% of the professing church holds to New Age at least one New Age belief, which is nothing short of a theological crisis in the church.  Atheism isn’t the problem anymore in our culture, and neither is naturalism. 62% of Americans hold to New Age beliefs, while only 3% of the American population is atheist.  New Age is the religion of the future and it is beginning to invade our culture and infiltrate the thought-life of Christians.

Our threat is this new wave of spiritual philosophy that draws from whatever religious tradition and practice it wants while promising its followers supernatural experiences and ascension into some hyper-spiritual state where they can attain paranormal powers and rise up the ranks of god-hood.  The threat is those teaching we can follow any path we want because God has revealed Himself in all world religions and is present in the universe as the energy of life.

Part of the problem is that Christians don’t know what is “New Age” and what isn’t.  Futhermore, they don’t know how to navigate or confute New Age ideas once they are identified.  As a church, we are admittedly under-equipped to deal with the type of spirituality that is taking over the culture and is now making its way into the churches.

As some of you know, I have recently written a book with Josh Peck of SkywatchTV called “The Second Coming of the New Age” (foreword by Bible scholar Dr. Michael Heiser) where we outline, expose, and refute the doctrines and practices of the New Age movement as being not only false but demonic.

We recently sat down with former pastor, best-selling author, and CEO of SkywatchTV Dr. Tom Horn to talk about the content of this book, these recent studies, and the pervasiveness of New Age spirituality in Western culture and its churches:

Meditation, The Occult, And The Bible: An Ex New-Agers Critique

Proof The Ascended Masters Are Demons In Disguise