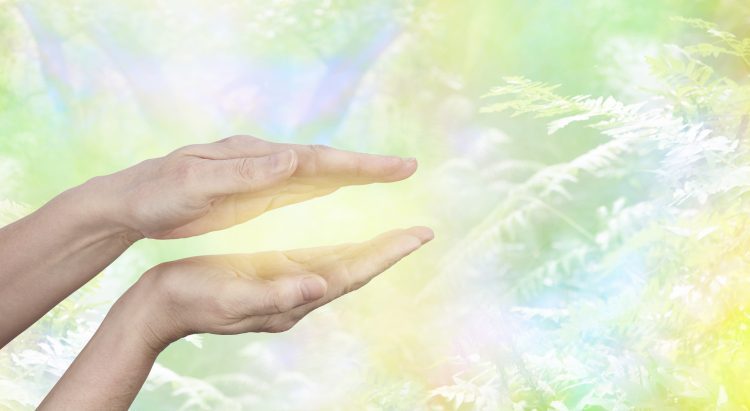 Note: The author of this article experienced what is known as qi/chi or universal energy when involved for many years in Eastern and New Age practices.

By Marcia Montenegro| Qigong has long been a popular health exercise and treatment in the West, and now there is qi-ssage, which is a massage based on qigong principles (“Qi-ssage combines Qigong principles with massage techniques,” by Frank Lee,http://www.sctimes.com/article/20101214/LIFE01/112140004/Qi-ssage-combines-Qigong-principles-with-massage-techniques). “Qigong combines meditation, breathing techniques, movement and visualization to promote healing and a sense of well-being” (Lee). Qigong and qi-ssage are both based on the concept of qi or chi (also spelled ki and sometimes transliterated as ch’i), which is a foundational belief of Taoism, a religion that developed from early Chinese Shamanism, 3000 to 800 BCE (see Eva Wong, Taoism, Chapter 1, “Shamanic Origins,” Boston & London: Shambhala, 1997).

The early Shamans in China believed there was a force in the universe, in nature, and within them. By cultivating the force within (qi or ch’i) through various exercises, movements, special diets and herbs, breathing exercises, and meditation (altered states), they believed they could enhance their life force and be healthier and live longer. Some even taught that you could attain immortality. The exercises were also used for divination. This is the origin of Qigong (also spelled Chi Kung).

“Chinese shamans used these exercises and meditations to commune with nature and natural forces and to increase their powers of healing and divination” (Kenneth S. Cohen, “What is Qigong?” http://www.qigonghealing.com/qigong/qigong.html). Qigong was absorbed into Taoism:

“Qigong was the ideal way for Taoists to realize their goal of wuji, an empty, alert, boundless state of consciousness, and xing ming shuang xiu, ‘spirit and body cultivated in balance'” (Cohen). There was no centralized authority or doctrine, so the teachings of Qigong and Taoism spread over the centuries via many teachers and an abundance of textual writings, spawning numerous sects.

The concept of Chinese qi/chi was attributed to and developed by philosophers such as Lao-tzu, Confucius, Mencius, and others between the sixth and fourth centuries B.C., and qi was considered to be “the source of vitality, harmony, creativity, and moral courage,” (Rosemary Ellen Guiley, Harper’s Encyclopedia of Mystical & Paranormal Experience, Edison, NJ: Castle Books, 1991, 627).

In Chinese cosmology, the relationship between heaven, earth, and man was paramount. This is reflected in the various categories of qi: Heaven Qi, Earth Qi, and Human Qi, which are each further subdivided. Heaven Qi contains planetary and Weather Qi, which are each also subdivided further. For example, Planetary Qi includes astrology and spiritual guidance. Earth Qi contains Natural and Human Made Qi which are both subdivided.

No matter where you look, Qigong consistently has a spiritual element due to its use of qi: “Some of the ways Qigong can be used is; to move the qi internally to remove stagnation, to connect with and draw upon universal qi, to balance the qi both internally and externally, to release negative or harmful qi and cultivate positive qi” and “the basic common philosophy is that qi is inherent in everything in the universe, including humans (we are not as special as we like to think). When this qi or energy stagnates or becomes out of balance we become sick. When it is in balance and flows freely we live healthy and happy lives,” (http://www.greenmountaintaichi.com/Qigong.cfm).

Qi by any other name is still “Universal Energy”

Chi/qi has parallels to prana (the divine breath of the cosmos in Hindu thinking) in India. Prana is an energy “upon which all things depend for health and life,” (Guiley, 626). Known generally as the “universal life force,” this energy is also known as “bioenergy,” (Ibid, 629-30), “vital energy,” “vital force,” or, most commonly in the United States, the “life force.” Manipulating, channeling, and balancing the universal life force is the basis of many alternative healing methods, such as acupuncture and Reiki, and is sometimes termed “energy healing.”

Chi or qi is also the basis for acupuncture, Tai Chi, and Feng Shui. One of the purposes of Tai Chi is to facilitate “the flow of qi through the body,” (Guiley, p. 599). “Just as acupuncture, chakra balancing or shiatsu massage can adjust the flow of energy in the body, so can Feng Shui adjust the flow of energy around us,” (Henwood, 6). The chi must flow “not too quickly and not too slowly,” and will stagnate or become destructive if it is blocked (Ibid). Additionally, the yin and yang (female and male) components of chi “must be in balance,” (Guiley, 200, 627).

Universal life energy, chi/qi and prana are also linked in many cultures to supernormal powers and sorcery. Tantra yoga allegedly cultivates the flow of prana in order to raise psychic powers, and prana is the source for exploits in Hindu magic (Guiley, 627). In alchemy, this universal force is called spiritus; the occult Kabbalah (Qabala) terms it astral light; and hypnotist Franz Mesmer called it magnetic fluid (Ibid, 626). The qi is also the source of power for levitation and other occult feats (Ibid, 327).

One traveler who chronicled his occult encounters in 19th century Asia wrote that he learned from a Hindu holy man that the vital fluid, the agasa or akasha, was the cause of all phenomena and was the “moving thought of the universal soul, directing all souls,” as well as the “force of which the adepts had learned to control,” (Louis Jacolliot, quoted by Guiley, 327). [The adepts are practitioners of occult powers].

Alternative energy healing and healing using qi is nothing more than occult and psychic healing. It is a technique based on esoteric beliefs about manipulating or channeling an unseen force and is universally practiced in the occult. Recipients of this healing may feel better temporarily, but sometimes they later become ill again or even more ill, or they experience odd bodily sensations, tremors, nightmares, sleep difficulties, and other unpleasant effects.

Some have tried to validate qi or chi as the breath of God.

God’s power to create is not man’s power nor does it belong to the universe, and God’s power is not a force to manipulate or channel, for healing or anything else. Man does not have the right to access God when he desires and to appropriate a power that he believes is God or is from God, or to appropriate a power that is from the “universe.” When efforts are made to do this, a power may be channeled, but it is not from God.

In fact, the attempt to channel or manipulate such a force is the underpinning of sorcery. Such a power is a counterfeit power or force from a personal intelligence that is evil and wants to deceive and destroy. Jesus described this personal source of evil in one place as a “thief” – “The thief comes only to steal and kill and destroy; I came that they may have life, and have it abundantly” (John 10:10).

Moreover, there is no scientific basis for energy such as qi. It is invisible, unquantifiable, unpredictable, and un-testable as an ingredient, element, or other organic material. I do not contest that what men call qi exists. Rather, I assert that it is not from God and, that in the long run, it is not beneficial, but is destructive.

Did Jesus Use Qi?

Jesus did not heal by channeling a universal energy or qi, but was acting with the power of God. As Acts 10:38 says, “God anointed Jesus of Nazareth with the Holy Spirit and with power. He went about doing good, and healing all that were oppressed by the devil, for God was with Him.”

The power of God was not coming through a technique or secret teaching, but from the person of Jesus Christ as an aspect of his deity. When Jesus conferred this power specifically to His disciples, He “gave them authority over unclean spirits, to cast them out, and to heal every kind of disease and every kind of sickness,” (Matthew 10:1, Mark 3:13-15, Luke 9:1).

After His resurrection, Jesus was given all authority: “All authority has been given to Me in heaven and on earth.” (Matthew 28:18). Jesus also said, “I have spoken openly to the world; I always taught in synagogues and in the temple, where all the Jews come together; and I spoke nothing in secret” (John 18:20).

Jesus’ ability to heal was not only a sign of his fulfillment of prophecies of the Messiah, but magnified the glory of God. After the blind man by the side of the road was healed in Luke 18:35-43, he followed Jesus, “glorifying God; and when all the people saw it, they gave praise to God,” (verse 43). This same praising of God happened after Jesus healed the paralytic (Matthew 9:2-8, Mark 2:10-12, Luke 5:22-26), and when He healed the “lame, crippled, blind, dumb, and many others…so that the multitude marveled as they saw the dumb speaking, the crippled restored, and the lame walking, and the blind seeing; and they glorified the God of Israel” (Matthew 15:30, 31).

By definition, a force or energy has unknown attributes and is blind to human need. How can a force show compassion, or bring healing, peace, or harmony? To do so would require an intelligence exercising will and choice, traits lacking in an impersonal force. How does one reconcile belief in an impersonal force with the belief in bad chi and good chi? Bad or good chi indicates moral sensibility and purpose, which are attributes of a personal intelligence. Yet chi and prana are supposedly not personal. One should ponder whether he/she can be comfortable with such a contradictory situation.

Qigong or qi-ssage may make the person feel better, but there may be a spiritual cost and, ironically, a physical cost as well.

The power of chi/qi, or any other system dealing with qi energy, pales in comparison to the power of Christ, who was given authority and power over all authorities, powers and dominions, both in heaven and on earth (Matthew 28:18; Ephesians 1:20, 21; Philippians 2:9-11; 1 Peter 3:22).

For this is the will My Father, that everyone who beholds the Son and believes in Him, may have eternal life; and I Myself will raise him up on the last day. John 6:40

And Jesus came up and spoke to them saying, ‘All authority has been given to Me in heaven and on earth.’ Matthew 28:18

Again the high priest was questioning Him, and saying to Him, “Are You the Christ, the Son of the Blessed One?” And Jesus said, “I am; and you shall see the Son of Man sitting at the right hand of Power, and coming with the clouds of heaven.” Mark 14: 61, 62

This article was originally featured on CANA and was republished with permission.