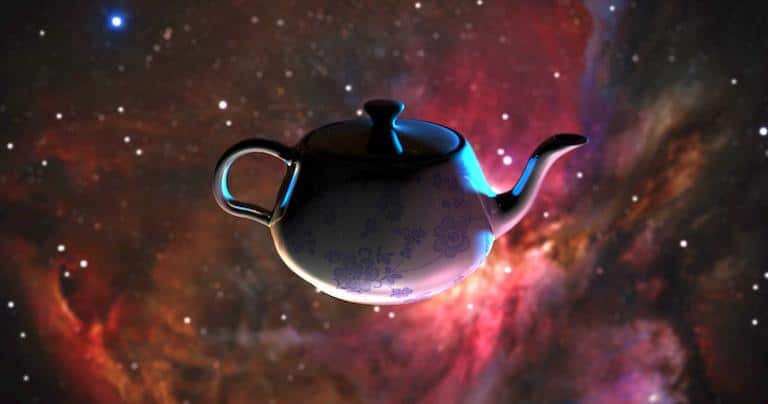 By James Bishop| Bertrand Russell was an excellent philosopher and I would definitely goes as far as to say that I, and many others, have benefited greatly from reading his essays. However, in one of his works, Russell reveals his skepticism of religion, especially its longevity in rational discourse, if one might term it as such,

“If I were to suggest that between the Earth and Mars there is a china teapot revolving about the sun in an elliptical orbit, nobody would be able to disprove my assertion provided I were careful to add that the teapot is too small to be revealed even by our most powerful telescopes. But if I were to go on to say that, since my assertion cannot be disproved, it is an intolerable presumption on the part of human reason to doubt it, I should rightly be thought to be talking nonsense. If, however, the existence of such a teapot were affirmed in ancient books, taught as the sacred truth every Sunday, and instilled into the minds of children at school, hesitation to believe in its existence would become a mark of eccentricity and entitle the doubter to the attentions of the psychiatrist in an enlightened age or of the Inquisitor in an earlier time” (1).

Like many atheists would argue today, Russell argued that as human beings learn more about the universe we find an ever shrinking need for religion to explain things. Religion, on this view, becomes smaller and smaller as science and human understanding of the nature and workings of the universe grows. According to Russell, religion has backtracked to a position in which it cannot be disproved.

But although I find some value in Russell’s analogy I think it is objectionable on several grounds. It is worth noting that a number of philosophers have objected to Russell’s analogy of which readers can engage elsewhere (2). Let’s first examine the value in the analogy.

Firstly, I would have probably agreed with Russell that if the theist had a faith that was immune to disproof then that faith is almost certainly irrational. With the exception of a few philosophical axioms that cannot be rationally doubted, a belief that arrives at the point of immunity to disproof would, as Russell rightly saw, have backtracked quite some way to that position.

The only people who have this sort of absolutist conviction in their beliefs are the likes of religious and non-religious fundamentalists who are incapable of charitably analyzing the weakness and/or challenges of their own views, nor being able to avoid strawmanning (unfairly representing and/or caricaturing) the philosophies held by ideological opponents (3). Nonetheless, for our purposes here we needn’t worry ourselves with these individuals.

Second, Russell’s analogy reminds me of the “god of the gaps” fallacy which results when theists posit God as an necessary explanation for phenomena that we currently do not understand or yet have an explanation of. As a theist, I obviously hold that some things can’t be explained by anything else other than through the work of God behind the scenes. For example, a number of well corroborated miracle healings, the incredible fine turning of the constants of nature/universe, the origin of the physical universe itself etc. are best explained by God in my current view (more on the relevance of these to Russell’s analogy in a moment).

However, many theists have put God in very uncomfortable positions by positing him as an explanation for phenomena that has ended up being explained through scientific developments. I would argue that the views held by ultra-literalist fundamentalist Christians often fall into this category. For example, we now know that all biological life on Earth are unified in that they possess common ancestry which, for obvious reasons, sits uncomfortably with theists who hold to special creationism, namely, that God created everything, including animals and human beings, in its final form a couple of thousand years ago.

This is one, of arguably many, factors behind the science-religion warfare thesis so often posited by skeptics today. But as notable theists have argued that rather than God being a gap filler, God is the author of the entire story. God is not explained away, but rather explains “why the universe exists at all, why it is intelligible, why it is governed by laws, why it is governed by the laws it is rather than some other laws, and doubtless many more things” (4).

So, these few valuable points raised by Russell aside, lets return to his argument that says that not only can’t we conclusively prove that there is no teapot orbiting between the Earth and Mars in space but also that because of the lack of evidence for such a teapot the reasonable conclusion should be that it does not exist. This is where one could posit a couple of objections.

For example, to use the Kalam Cosmological argument, it would seem to me that it gives theists compelling grounds for believing in the existence of a beginningless, uncaused, timeless, spaceless, changeless, immaterial, enormously powerful, personal creator of the universe. This is an argument that marshals both religiously neutral scientific and philosophical evidence and reasoning in premises with a conclusion that clearly has theological significance.

It would then seem, contrary to Russell’s views, we are rationally justified to believe in the deity that we find “affirmed in ancient books, taught as the sacred truth every Sunday, and instilled into the minds of children at school.”

Moreover, I don’t think it would be impossible to disprove or at least render serious doubt Russell’s idea of an orbiting teapot. In fact, one could think of several ways to disprove such a thing. Philosopher William Lane Craig explains,

“We know that no Soviet or American cosmonauts have carried teapots into space and discharged them out of their space capsules. Moreover, no extraterrestrial would bring teapots to the Earth in space because you can’t pour tea in space out of a tea pot. You might need to suck it out of a tube but in a non-gravity situation it is pointless to have a teapot. So I think we have every reason to think that there is not a teapot orbiting the Earth, and it is not just the absence of evidence for it” (5).

“Clearly we have a great deal of evidence against teapotism. For example, as far as we know, the only way a teapot could have gotten into orbit around the sun would be if some country with sufficiently developed space-shot capabilities had shot this pot into orbit. No country with such capabilities is sufficiently frivolous to waste its resources by trying to send a teapot into orbit. Furthermore, if some country had done so, it would have been all over the news; we would certainly have heard about it. But we haven’t. And so on. There is plenty of evidence against teapotism” (6).

It would appear then that Russell’s analogy to an orbiting teapot rests on somewhat more shaky grounds than would be initially perceived.

Now, an additional critique is that the analogy seems to presuppose the presumption of atheism. What does this mean? This is arguably best expressed in the words of Richard Norman who penned that “the onus is on those who believe in a god to provide reasons for that belief. If they cannot come up with good reasons, then we should reject the belief” (7). Similarly, prior to Antony Flew’s exile from atheism, he most famously urged that the ”onus of proof must lie upon the theist” and that unless compelling reasons for God’s existence could be given there should be a “presumption of atheism” (8).

But this reasoning is definitely objectionable. It is difficult not to receive the impression that by presuming atheism the atheist skirts very close to the immunity of the orbiting teapot, at least in practice. Why? Well, the atheist, on this view, puts himself in such a position that he can merely dismiss any evidence that theists provide which is often an intellectual trap for as some theists have correctly observed, no evidence for God is sufficient enough for some atheists.

Even when pressed, some atheists contradict themselves and hold to hidden premises and assumptions when asked what evidence would convince them that a god exists. Rather, it would seem to me that weak agnosticism would be the reasonable ideological position to adopt should theists be unable to provide evidence for their god. Weak agnosticism, as opposed to strong agnosticism, says that a god may or may not exist, and thus leaves the question of God’s existence open to support or rejection.

Now, although many atheists have redefined their atheism to be just a “lack of belief” in a deity, I believe that atheism really does need some rational justification lest it becomes little more than a random psychological disposition, hence pointless to engage (it makes no claims).

Rather, I believe that atheism entails the strong and explicit views. Strong atheism is when an individual accepts as true the proposition that “God does not exist,” whereas the latter is when the individual makes a positive assertion regarding their lack of belief in God and/or gods. These views are expressed across the board in the atheist camp (even by those who define their atheism as just a lack of belief), and should not be merely presumed but rather justified.

So, I think that as a result of these several objections raised concerning Russell’s teapot analogy one is warranted in rejecting it.