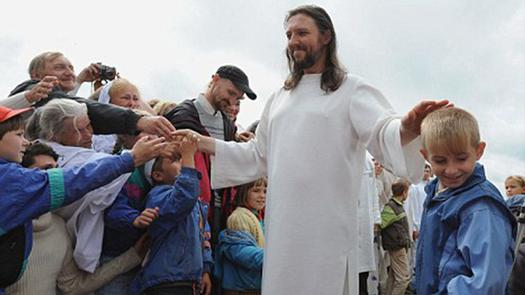 By Steven Bancarz|  A 30 year old Russian patrol officer Sergey Anatolyevitch Torop had a revelation one day that he is actually Jesus reincarnate, and that his mother is actually Mary.  What a profound revelation to have.

He started a religious organization known as the “Church of The Last Testament”, named after his 12 book addition to Scripture he wrote called The Last Testament, and has since then amassed at least 10,000 dedicated followers, though some say this number is closer to around 50,000.

He is called “The Teacher” and “Vissarion” by his followers, and is looked at as being a beacon of sacred truth and wisdom.  What exactly do they believe?  Doctrinal focuses of this religion include UFOs, end times, prophecy, vegetarianism, reincarnation, and Buddhism.  They seek to unite all faiths and wisdom traditions under a universal umbrella with Vissarion at the top.

Here is a link to the preface of the Last Testament, which sounds almost identical to some of the channeled material I used to read as a New Ager.  Interestingly, he claims to have memories of having been Jesus in his past life, walking the earth 2000 years ago.

“There are conscious and unconscious memories.  It’s senseless to preserve a body with an identical mind.”

This of course impossible given the revelation of the New Testament. Jesus warned about impostors of himself in Gospels of Mark, Luke, and Matthew where he says “For many will come in my name, saying, ‘I am the Christ,’ and they will lead many astray” – Matthew 24:5

Jesus specifically tells us to watch out for those who claim to be Christ, and here is a man claiming to be Christ.  The only prophecy being fulfilled here is Jesus’ warning of false prophets arising in the final days.

Vice did a documentary on this man, travelling up to their compound up in Siberia to interview him and his followers: