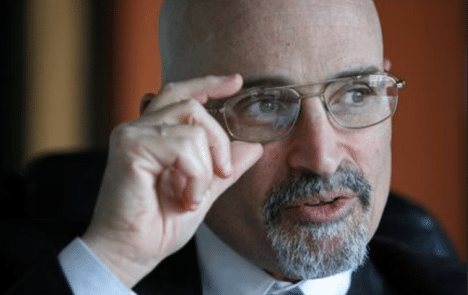 By James Bishop| Steve Beren is an American political activist and a pro-liberty conservative citizen who is known for his support of the U.S. led war against terrorism (1). Beren recounts major transitions in his life notably from that of being an atheist to belief in God.

He begins his testimony in affirming his current worldview, “Today, I am an evangelical Christian. On February 10, 1995, I made a life-changing decision to turn away from my past and to commit my life to Christ. I certainly had a past worth turning away from.”

In fact he recounts being particularly anti-Christian,

“I was once an atheist, opposed in principle to the very concept of Christianity. I mocked God, and ridiculed faith and moral values” (2).

Today, however, when he hears the lyrics to the song Amazing Grace – “that saved a wretch like me” – he knows that they are meant for him since he is amazed at how God would accept someone like him, “Some people wrestle with the demons of alcoholism or drug addiction or depression. My demons were different.” For instance, prior to his conversion he considered himself an enemy of the United States, “I was once an opponent of the United States, opposed in principle to the very concept of patriotism. I opposed America and supported its enemies.”

He says that his real opposition began taking shape and form while he was just a teenager, “As a 17-year-old college freshman at CCNY, I joined the Young Socialist Alliance, a communist youth group, in November 1968.” From then onwards he spent 22 years as “a communist and supporter of the Socialist Workers Party” where virtually all of his time and resources were devoted to the “movement.”

He would resign from the party at the end of 1990 as he found the job too demanding, “not because I had changed my mind, but because I was simply “burnt out.”  I “retired” from politics, and started to do what most people do – concentrate on career, friendships, family, health, etc.”

How he came to Jesus

Due to his extreme loyalty to communist cause, Beren ended up being “totally broke and heavily in debt” since he had “contributed a large part of my income over the years to the party. As I worked my way out of debt, I realized I had some “personal issues” to deal with.””

This was when he discovered that he had a strong “spiritual lack” in his life, “I gradually began to see that these “issues” reflected a spiritual lack – a very severe emptiness. Gradually, and not necessarily according to a plan, I began to read the bible and study religious history. My life changed.”

Beren would reflect on some of the “blatantly dishonest things” he had done while previously an atheist and communist, “For example, I participated in communist efforts to infiltrate certain key trade unions and certain key industries, lying about my job history and creating false resumes so that I could become a machinist or steelworker or textile worker or airport worker.”

However, when he gave his life to Jesus things changed for the better and he had managed to obtain and hold down “a steady honest job” within which he found much enjoyment, “I found that I enjoyed working and pursuing a career. I even had some modest success.

I began to meet spiritually-minded people, and decided to commit my life to Christ, becoming a Christian on February 10, 1995. The exact turning point and decision point was a particularly intense 2:00 am Christian radio talk show, but it really was a process.”

But the changes continued in his life, “After I became a Christian, my life changed in many ways. I started to examine my past, recognized my failings and sins, and went on a different path.

During that time, I also went through a gradual political evolution, changing my views about government, capitalism, patriotism, the military, etc. But I was no longer an activist – I was just a private citizen…”

Beren hopes that his testimony can stand in as an example and reminder of “God’s love, power, and grace.”

Readers can further check out some of Beren’s articles here.

2. Beren, S. My Conversion from Atheism and Communism to Christianity. Available.