Home Atheism Evolution, If It Occurred, Is Evidence For God’s Existence 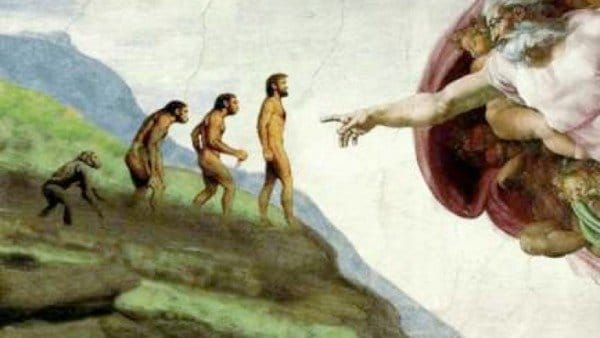 By James Bishop| In their book The Anthropic Cosmological Principle two prominent scientists Barrow and Tippler lay out ten steps that non-theistic evolutionary process would need to have gone through in order to bring about modern man. However, their calculations suggested that each of these steps were so improbable that even before it could ever possibly occur our sun would have ceased to exist and in the process obliterate Earth.

1) The development of the DNA-based genetic code.

2) The invention of aerobic respiration.

3) The invention of glucose fermentation to pyruvic acid is unique seme which evolved in bacteria and remained unmodified in all eukaryotes.

5) The origin of mitochondria: these are the bodies in the cytoplasm of eukaryotes wherein the energy molecule ATP is synthesized.

6) The formation of the centriole/kinetosome/undulipodia complex; such an event was essential to the evolution of the reproductive system of eukaryotes and of nerve cells.

7) The evolution of an eye precursor.

8) The development of an endoskeleton.

9) The development of chordates.

10) The evolution of Homo Sapiens in the chordate lineage.(1)

This is an extraordinarily large number. Consider it in hindsight of the number of electron particles in the known universe, 10^87, or the number of observable stars, 10^24. Or the gigantic number of connections between neurons in our brains, 10^15 (1 quadrillion or 1,000,000,000,000,000). These are very large numbers but they nowhere come close to Barrow and Tippler’s calculation.

When I claim to doubt belief in non-theistic evolution’s ability to produce mankind one could accuse me of the fallacy of personal incredulity. Namely, that because I doubt something it doesn’t mean that it is false. But that is the point I actually wish to make. Given that Barrow and Tippler’s calculations follow, it would be like winning the lottery 5000 times in a row.

After a few times at winning I’d suspect that something was up. Sure, one could accuse me of being incredulous that I could win 1000 times in a row, but I’d maintain that I have good grounds for that conclusion.  It is just too improbable to happen by chance alone.  In this way the Christian may view these calculations.

However, the Christian can argue that this puts the atheist on the back foot, as philosopher Alvin Plantinga argues: “For the naturalist evolution is the only game in town. No matter how fantastic the odds, no matter how improbable, it’s got to be true” (3). William Lane Craig, upon reviewing Barrow and Tippler’s calculations, explains that evolution is not “a good argument for atheism, quite the contrary, I think it provides grounds for thinking that God superintended the process of biological development” (4).

William Lane Craig explains this quite well in his former debate with Christopher Hitchens:

This article was originally featured on the website of James Bishop and was republished with permission with minor edits.