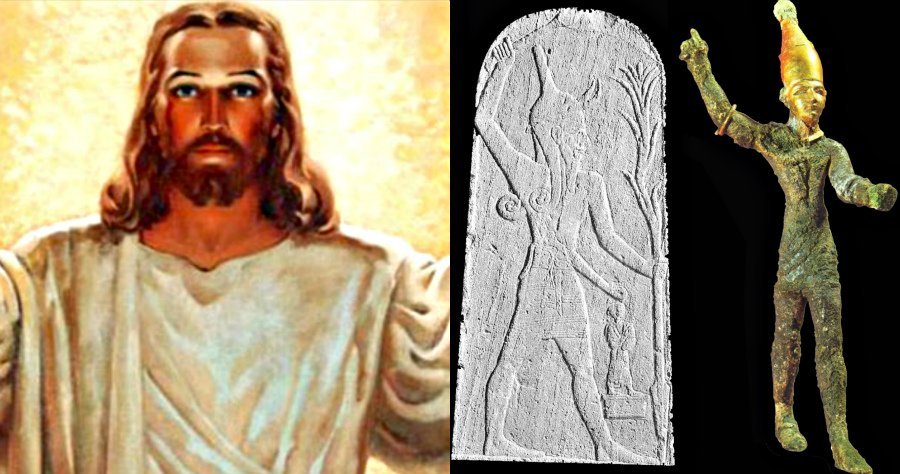 By J.P. Holding| Baal is a figure known from the OT who is sometimes claimed to be another parallel for Christ. Let’s have a look at this — our source is Smith’s Origins of Biblical Monotheism[104ff].

Baal is sometimes reckoned as one of those “dying and rising gods” under Frazer’s outdated thesis. It should first be noted that the actual tablets describing Baal’s story do not actually preserve an account of Baal’s death and supposed return to life; that portion of the tablets are lost, and the events are inferred from remaining parts of the story.

In what we have left, Baal is discovered dead and given a burial; but later in the narrative, he reappears alive. In other works, if a certain verb is read as passive, it MAY refer to Baal as “brought to life,” but it may also be an active verb describing Baal as one who “brings to life.”

Secondarily, one of Baal’s daughters is named “Earthy” but the name MAY mean “Netherworldly.” And that is the sum and total of the evidence. In 70+ other texts about Baal, there is no mention of his death at all.

Anything like Christ? Not at all, and no more even on the surface than the naturally-expected theme of reversal of death as the ultimate bugaboo; no more an imitation of Christ than your latest zombie creature feature. Smith, seemingly with pagan-mythers in mind, writes: “…any attempt to render a reconstruction of Baal’s death and return to life should make no assumption about the nature of the latter.” [120]

After extended analysis Smith connects the story to the succession of the Ugaritic kingship, with Baal’s death representing the demise of the king and his return to life representing the role of the living king. [128]

A few claims have also circulated about an alleged “Passion” of Baal with details very close to that of the Passion of Jesus. A very helpful research associate has sent us copies of some material that deals in this issue and addresses the question.

In a 1921 edition of the Journal of the Royal Asiatic Society, a scholar named H. Zimmern claimed a find of “stage-directions for a sort of miracle-play” performed at the temple of Bel-Marduk (i.e., Baal) annually. In this play, Baal was alleged to have been “bound and brought before the tribunal which awaits mankind on the bank of the river of death.” He was scourged, condemned to death, and then led away to a prison-house.

Another “malefactor was led also away to execution,” while a second one was released.

Once Baal was put in prison, “the city was plunged in confusion” and his clothes were stripped from his dead body. A goddess then washed away blood that had flowed from a “wound in the side” of Baal; and eventually he rose from the dead after his followers lamented. A parallel is also alleged in that Baal “descended into hell” and was welcomed by the other spirits.

Even on the surface, there are some problems here with a comparison to the Passion of Jesus. The “malefactors” would fit not the two thieves on the cross, but maybe one thief, and Barabbas; a third party is missing.

The “descent into hell” for Jesus is questionable, and we have noted above problems with an alleged death of Baal.

The problem is that this report by Zimmern was uncritically picked up by the Christ-myther G. R. S. Mead, who in his periodical The Quest, though he admitted the highly fragmentary nature of the text and considered it “perhaps foolhardy” to make comments, nevertheless creates two parallel columns in which he finds over a dozen parallels between Jesus and Baal based on this text.

Again, many comparisons do not fit; many more though are of the sort that would be found of ANY prisoner in the ancient world condemned to death (being led away; being tried before officials; being scourged – as part of the normal status degradation ritual; the dividing of clothes; the care for the dead).

Other than this, Mead also hops from one Gospel to another, treating them as a whole so he can parallel Matthew’s guards at the tomb to those who guard Baal in prison; and he also uses John’s singular episode of Mary Magdalene as a parallel to the lament of a female follower of Baal (even though it is doubtful Mead would have seen a unified tradition behind all four Gospels). However, correctives come first from admonitions above that the text is fragmentary; second, from Alasdair Livingstone’s update in Mystical and Mythological Explanatory Works of Assyrian and Babylonian Scholars (Clarendon, 1986) which tempers some of Zimmern’s enthusiasms in which he himself made a comparison to the Passion of Jesus.

Livingstone reports that later scholars (van Soden, Postgate) re-examined the text and found no death of Baal, nor a resurrection; they connected the text to the destruction of Babylon in 689 BC and the “deportation of the statue or symbol of Marduk [Baal] to Assyria.” Livingstone himself finds it to be an Assyrian composition, dated no later than 612 BC.

Livingstone’s commentary is of definite interest. References to another deity and his cult center affirm that the point is that Baal’s statue is what has been captured, and this is what the play is about. The other god, Nabu, goes out and sprinkles date palm stamens as a sort of rebellion; in this way he becomes the other “criminal” of the story.

Later, athletes are commissioned to guard Baal while in prison, at the order of Assur (another god; again reflecting the capture of Baal’s statue). Discord in the city also clearly relates to the discord caused by the invasion; no parallel can be had here to the story of the darkness over the land, etc. at the crucifixion of Jesus.

The critical lines (59-67) refers to someone who is “invoked to keep alive, and not kill” and another (?) someone who asks “to be allowed to mourn and bury.” The names of these someones is not preserved. Baal is clearly in danger, but there is no actual record of his execution.

Whoever did die, his clothes are collected (line 84) but these are also not clearly Baal’s. The reason a clear identification cannot be made is that while Baal is indeed a criminal in this story, so is Nabu, and Livingstone notes that there may have been other criminals present.

In conclusion, any attempt to parallel the “passions” of Baal and Jesus must account for the clear nature of the Baal story as an elaborate allegory for what happened when Babylon was invaded and Baal’s statue was taken, as well as consider that most of the parallels drawn by Mead involve “universals” of practice in the ancient world.