Home Bible 8 Reasons Why The Shroud Of Turin Might Be The Burial Cloth... 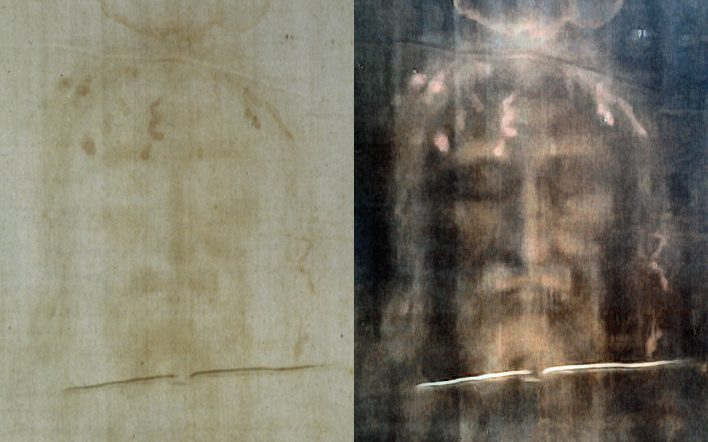 The front and the back of the crucified man is shown, the front on one end of the cloth and the back on the other end with the head meeting towards the middle. The hands of the man are crossed while the knees are slightly bent. Blood covers the Shroud especially at the nail marks on the hands and feet.

The Shroud is quite controversial, especially since 1988. A team of researchers took three samples from the Shroud and dated them using radiocarbon at three independent laboratories. The test deemed that the Shroud dated to around 1260-1390 A.D. thus seemingly proving that the Shroud was a medieval hoax.

There is no way to conclusively prove or disprove the Shroud. Yet, data will lead one to accept or reject the Shroud’s authenticity. From my research, I have discovered 8 reasons why the Shroud is probably the authentic burial cloth of Jesus.

Many researchers will dispute the claim, however, a growing consensus of researchers are accepting the notion that the 1988 carbon-dating test was flawed (Stephen Adams, Telegraph, 2009).

It is well documented that the Shroud was damaged by a fire in the 1200s and was extinguished and repaired by a group of nuns at the cathedral where the Shroud was held.

A person can still see the marks on the Shroud where it was damaged. It is now widely accepted that the fibers tested in 1988 came from the nuns’ repair work. Recent studies confirmed that this was the case as dye was found on the fibers that were tested, indicating that the fibers did not originate with the original cloth (Adams, Telegraph, 2009).

2) The blood on the Shroud is authentic

Skeptics have long thought that the image and blood on the Shroud were painted on the cloth. However, it has been confirmed that the blood and image have separate origins. When examining the cloth, researches have noted that the blood appeared before the image. The Turin Shroud researchers have adopted the slogan “blood first, then image” to describe the Shroud. The blood has been confirmed as authentic hemoglobin and identified as Type AB.

3) The image on the Shroud is not a painting

Also, the image is a photographic negative and is three-dimensional. Whatever the image is, it certainly did not come from a painter’s brush.

4. The pollen on the Shroud is found exclusively in the Jerusalem area

Pollen has been found throughout the Turin Shroud. Dr. Max Frei noticed that around the head and the abdomen, the imprints of flowers are visible although they are quite difficult to observe.

The pollen and the imprints match flowers found in the vicinity of Jerusalem including the pistacia lentiscua, the chrysanthemum coronarium, and the gundelia tourneforii (Whanger and Whanger, Duke.edu, 2015). The Council for Study of the Turin Shroud from Duke University notes the following:

“While there are images of hundreds of flowers on the Shroud, many are vague or incomplete. We feel we have identified, tentatively but with reasonable certainty, twenty-eight plants whose images are sufficiently clear and complete to make a good comparison with drawings in the botany literature.

These findings suggest that the Turin Shroud must have originated in, or at least have been in the vicinity of, Jerusalem. That the pollen dates to the first-century also provides an indication that the Shroud was first found in first-century Israel.

5. The wounds of the man on the Shroud match the details of Jesus’s crucifixion 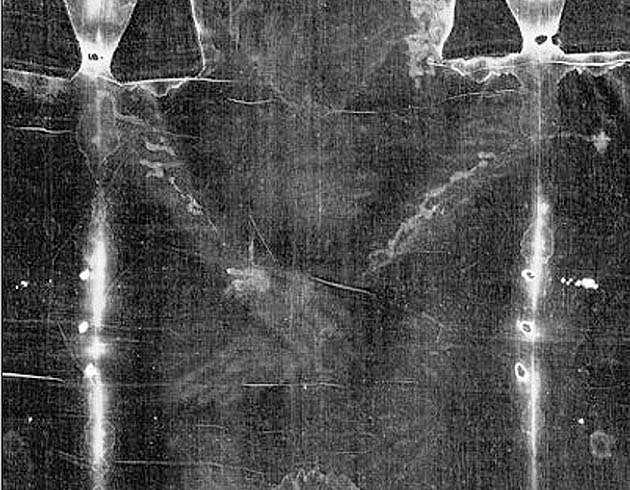 In addition, the whip markings on the man’s back match the ends of the flagrums used by the first-century Romans for scourgings.

6. The points of the face match those of the earliest portraits of Jesus 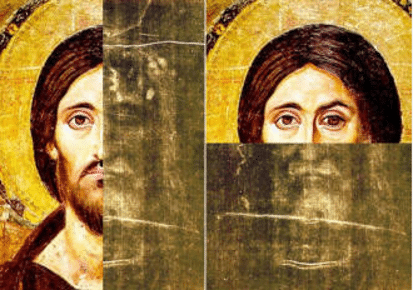 The Council for Study of the Turin Shroud also made another important evaluation of the Shroud. They noted that early depictions of Jesus match certain details of the facial image found on the Shroud. The Christ Pantocrator of St. Catharine’s Monastery at Sinai is one of the oldest Byzantine religious icons which dates to the 6th century (i.e., 500-599 A.D.).

For more information on the Christ Pantocrator painting, see https://en.wikipedia.org/wiki/Christ_Pantocrator_(Sinai).

7. The identical position and type of blood on the face of the Shroud with that of the Sudarium of Oviedo. 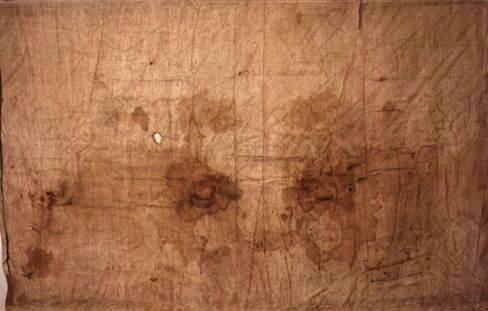 Another artifact of great interest is a cloth called the Sudarium of Oviedo. The Sudarium is a covering that is said to have been placed over the face of Jesus when he was lowered from the cross. The cloth may have remained there for his burial. The Gospel of John notes the possibility of both cloths.

John notes that “The wrapping that had been on his head was not lying with the linen cloths but was folded up in a separate place by itself” (John 20:7). While the Sudarium does not contain a facial image, it does have a large amount of blood around the nose and forehead.

8. The probability of high-powered ultraviolet radiation used to make the image on the Shroud.

One of the more bizarre features of the Shroud is the X-ray that is found of the man’s teeth and fingers. Upon closer examination, one will notice squares around the mouth. These squares have been discovered to be an X- ray of the man’s teeth. The fingers appear elongated because a person is viewing the man’s phalanges.

Nothing existed in medieval or ancient times that could produce such an X-ray as this. It has been theorized that when Jesus resurrected from the dead, a large burst of radiation emitted which would have created the image on the cloth. Studies have indicated that “the power of VUV radiations required to instantly color the surface of linen that corresponds to a human of average height, body surface area equal to = 2000 MW/cm2 17000 cm2 =34 thousand billion watts makes it impractical today to reproduce the entire Shroud image using a single laser excimer, since this power cannot be produced by any VUV light source built to date (the most powerful available on the marked come to several billion watts)” (uCatholic.com, 2016).

To make matters more interesting, the research team at the Church of the Holy Sepulchre noted that “measuring devices either malfunctioned or ceased to work at all…previously performed analyses with the instruments seemed to have been distorted by an electromagnetic disturbance” (uCatholic.com, 2016).

As archaeologist and Christian apologist, Ted Wright, once said, “we can’t be completely dogmatic about the Shroud of Turin. But there is certainly a high degree of probability that it is genuine.” I think Wright is correct.

It must be said that the Christian does not need the Shroud of Turin to provide evidence for the resurrection of Jesus. A compelling case for the resurrection of Jesus of Nazareth can be made without the Shroud. However, if the Shroud of Turin is authentic, then the believer can catch a glimpse of the Galilean who brought about salvation to the world. If not, the Christian has nothing to lose.

It is truly a win-win situation. The documentary evidence from both Christian and non-Christian sources alone are enough to verify the reliability of the crucifixion and resurrection account. But, it would not be surprising if the same Jesus who appeared to skeptical Thomas is the same Jesus who left a relic that would demonstrate to billions and billions more that he had indeed risen.

Can we ever be certain that the Turin Shroud holds the image of Jesus of Nazareth? Probably not. However, the evidence seems highly probable that the Turin Shroud is genuinely the cloth that covered Jesus of Nazareth before his amazing resurrection from the dead. If so, the image of Jesus could have been left behind, but the real Jesus is no longer there. He is alive! Jesus is now at the “right hand of God and intercedes for us” (Romans 8:34).

“True, we do not have absolute proof for the identity of the man of the shroud. Neither do we need it to demonstrate the reality of the death and resurrection of Jesus (or for anything else in the Christian faith). But it appears to provide strong empirical corroboration for Jesus’ resurrection, and when combined with the historical evidence for this event I would submit that we have a twofold apologetic from both science and history.” – Dr. Gary Habermas, New Testament historian

Adams, Myra. “Easter and the Shroud of Turin, ‘Nothing is Impossible with God.” NationalReview.com (April 15, 2017). Retrieved April 17, 2017. http://www.nationalreview.com/article/446763/easter-shroud-turin-jesus-christ-carbon-14-dating-medieval-forgery-debunked-crucifixion-resurrection

Share4K
Tweet
Pin104
4K Shares
Enjoy this article? Take a moment to support us on Patreon!