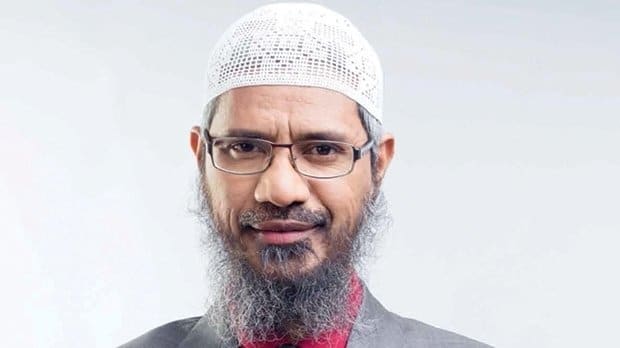 By George Mitrakos| Over 17 million followers on Facebook, 150 thousand on twitter and over 4000 lectures, Dr Zakir Naik is indisputably the most prominent and influential Islamic scholar of our time. His supposed vast knowledge of world religions and ability to recite verses at crazy speeds off the top of his head has made him one of the most go-to scholars when it comes to Islamic theology and comparative religion.

However, although considered to be untouchable, Zakir Naik may not be the all intelligent and ever so gracious scholar after all. Here are 4 crazy things that you didn’t know about Zakir Naik.

Now, considering his supposed vast knowledge of world religions, we would think that Zakir would jump on the opportunity in debating with Christians in an attempt to defend the Islamic faith. And indeed he has done so in the past with people like Dr William Campbell and Pastor Ruknudin. And if you are like me, you probably have no idea who these people are (I could be wrong). But that is precisely the point.

The ONLY people Zakir seems to debate with are, well, non-debaters. He takes on platforms in which he knows that his opponents have very little knowledge of both Islam and theological debate, which would eventually make him look more credible than he actually is.

And we know this to be true because he constantly claims to be open to debating anyone, all the while rejecting them when the requests are brought forth. Here is a list of some people who challenged Dr Zakir to debate:

However, the above 4 people all have 4 things in common, they:
1) Know how to debate.
2) Know a great deal about the Christian and the Islamic faith.
3) All challenged Zakir to debate.
4) All got rejected by Zakir.

Now Zakir’s reasoning behind his rejection is that he will not debate anyone who can’t bring in a minimum of 10 thousand people. However, when it comes to debating non experienced Christian debaters, as we mentioned, this rule does not apply. The room actually held way less than the number he now requires, (a couple of hundreds).

It seems as if the only time he applies this rule is when he knows the opposing side will give him trouble.  Here is a video explaining it perfectly:

But the inquiry which arises is the following: Why is Islam’s greatest scholarly champion rejecting knowledgeable Christian debaters, but is quick in debating less experienced ones?

Being a medical doctor, we would think that Dr Zakir Naik would have great knowledge concerning science and evolution. However, there is a video that was posted which took a 5 minute excerpt of a video which displays Zakir as attempting to explain evolution. Within the 5 minute video, 25 mistakes were detected. This averages to about 1 mistake every 12 seconds.

Some of these mistakes are:

1. He stated that Galileo was sentenced to death, when in fact he was imprisoned and put to house arrest. He then died of old age.

2. He claimed that homosapiens died 500 thousand years ago, when in fact WE are homosapiens.

3. He mentioned random people who wrote books, but upon even the slightest research, we come to discover that no such people actually exist.

Here is the video:

3. Zakir is under police investigation

Many Muslims may not know this, but Zakir has been under police investigation for a little while now. The charges against him include illegal proselytizing, meaning that it is believed that he is paying people to convert to Islam on his show, “Peace tv” in order to obtain more foreign funding and support.

PA Inamdar, the president of the Maharashtra Cosmopolitan Education Society at Pune’s Azam Campus, hosted Dr Naik’s event in 2008. During this show, Zakir supposedly converted 12 people to Islam. However, the scenario felt so orchestrated that Inamdar went right up to Dr Naik and his people and told them that what he was doing was dangerously inappropriate.

Mumbai police also suspect that Naik is misusing his funds to illegally coerce people into the faith, and that his converts are provided with great benefits and are taken care of tremendously, in terms of finances.

As a matter of fact, India Today’s investigative reporters spoke to some of the IRF members who claimed that Zakir is actually on Saudi payroll for proselytising.
Also, Zakir’s guest manager Arshi Qureshi was arrested from his house due to the disappearance of 21 youths, who were suspected to have joined Isis.

And according to Maharashtra’s anti-terror squad, Qureshi converted around 800 people to Islam under “suspect circumstances.” Ebin Jacob was the brother of one of these victims who stated that they attempted to “forcibly convert him to Islam” as well as to join Isis. Based on this statement, the Palarivattom police slapped charges under Section 13 of the Unlawful Activities (Prevention) Act (UAPA).

Now seeing that we got passed his erroneous statements, his cowardice to debate and his police investigation, let us now delve into some outrageous comments Dr Zakir has made throughout the years, and then let you be the judge on whether this man can be deemed as an “expert” on Islam and comparative religion.

“During a question on one of his shows, Dr zakir Naik claimed that it is SCIENTIFICALLY proven, that those who eat swine, become swine. The context is that the western world contains husbands who “swap wives” for sexual pleasure. And he goes onto to blame this on their bacon consumption.”

When Dr Naik was questioned concerning the qur’anic passage which speaks to beating your disobedient wives, Naik responded with the following “This passage is speaking to a symbolic beating. Muhammad said that it is the equivalent of beating your wife with a TOOTHBRUSH.”

The only two options before a woman who cannot find a husband is to marry a married man or become public property.” In other words, what Naik is doing is proposing that woman only have 2 choices. 1) Get married. 2) If you can’t, then you will be a prostitute. I don’t think it ever occurred to him that some woman just want to remain single without sexual relations to focus more on God and their religious faith.

When the question was asked on why people of other faiths can’t build places of worship or preach their religion under an Islamic state, Zakir responded “Would you hire a teacher who told you that 2 plus 2 is equal to 5? No. In the same way, the reason why we don’t allow the preaching of other faiths in an Islamic state is because we believe 2 plus 2 is equal to 4, and not 5”.

Now, the purpose of my article is not to undermine the intelligence of any and every Islamic scholar. In fact, there does exist great Islamic debaters out there, such as Shabir Ally, who have taken upon themselves the task of debating people like James White, William Lain Craig and many others, in an attempt to defend their theological viewpoints.

My purpose, however, is to demonstrate to you that this man who many regard as “ a lion for Islam” is actually nothing more than a fraud who lacks respect for his audience and listeners around the world.

America After 911: Is Religion Evil?