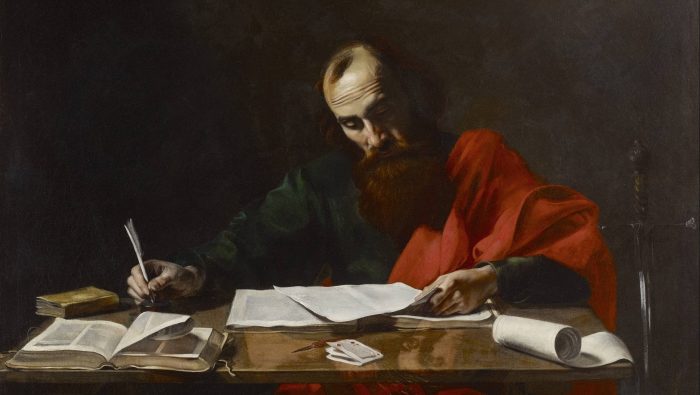 By Blake Giunta| The 1 Corinthians 15 creed is, according to most scholars, a tradition or recited formula that Christians would quote or articulate. Paul claims to be doing this in chapter 15 of his letter to the Corinthians. He writes:

The question is, is Paul lying? Is he really reciting something that pre-dates him that he received from someone else, or is this something he formulated himself?  The strong majority of historians acknowledge that the creed dates back to AD 30-35. A very small minority of exceptions go to AD 51.1

Scholars date this creed to within 3-5 years

The Oxford Companion to the Bible: “The earliest record of these appearances is to be found in 1 Corinthians 15:3-7, a tradition that Paul ‘received’ after his apostolic call, certainly not later than his visit to Jerusalem in 35 CE, when he saw Cephas (Peter) and James (Gal. 1:18-19), who, like him, were recipients of appearances.” [Eds. Metzer & Coogan (Oxford, 1993), 647.]

Gerd Lüdemann (Atheist NT professor at Göttingen): “…the elements in the tradition are to be dated to the first two years after the crucifixion of Jesus…not later than three years… the formation of the appearance traditions mentioned in I Cor.15.3-8 falls into the time between 30 and 33 CE.” [The Resurrection of Jesus, trans. by Bowden (Fortress, 1994), 171-72.]

James Dunn (Professor at Durham): “Despite uncertainties about the extent of tradition which Paul received (126), there is no reason to doubt that this information was communicated to Paul as part of his introductory catechesis (16.3) (127). He would have needed to be informed of precedents in order to make sense of what had happened to him. When he says, ‘I handed on (paredoka) to you as of first importance (en protois) what I also received (parelabon)’ (15.3), he assuredly does not imply that the tradition became important to him only at some subsequent date. More likely he indicates the importance of the tradition to himself from the start; that was why he made sure to pass it on to the Corinthians when they first believed (15.1-2) (128). This tradition, we can be entirely confident, was formulated as tradition within months of Jesus’ death. [Jesus Remembered (Eerdmans, 2003) 854-55.]

Michael Goulder (Atheist NT professor at Birmingham)” “[It] goes back at least to what Paul was taught when he was converted, a couple of years after the crucifixion. [“The Baseless Fabric of a Vision,” in Gavin D’Costa, editor, Resurrection Reconsidered(Oneworld, 1996), 48.]

N.T. Wright (NT scholar [Oxford, 5+ honorary Ph.ds]): “This is the kind of foundation-story with which a community is not at liberty to tamper. It was probably formulated within the first two or three years after Easter itself, since it was already in formulaic form when Paul ‘received’ it.(So Hays 1997, 255.)” [Resurrection of the Son of God, 319.]

Craig Blomberg: “Thus even renowned atheist historian Gerd Ludemann acknowledges that within one to two years after his death the belief that Jesus had been raised from the dead was so widespread and central to Christian practice that it formed part of the basic catechetical instruction. This is no late evolutionary development of Christian faith decades after the real facts were forgotten. (Ludemann with Ozen, What Really Happened to Jesus? p. 15)” [The Historical Reliability of the Gospels, 148.]

A. J. M. Wedderburn (NT professor at Munich): “One is right to speak of ‘earliest times’ here, for in all probability this statement gives the content of the Christian faith which Paul himself had received, a content, therefore, which may well go back to the time of Paul’s conversion, most probably in the first half of the 30s.”

Historian Gary Habermas: this is the “most popular view” [“Experiences of the Risen Jesus: The Foundational Historical Issue in the Early Proclamation of the Resurrection” in Dialog: A Journal of Theology, Vol. 45; No. 3 (Fall, 2006), 288-297.].

Michael Goulder: “goes back at least to what Paul was taught when he was converted, a couple of years after the crucifixion.” [“The Baseless Fabric of a Vision,” Resurrection Reconsidered, ed. D’Costa (Oxford: Oneworld, 1996), 48.]

What this means is that Christianity was not invented or created by Paul, as some skeptics have said, since Paul received pre-existent material outside of himself that he is passing along to the church in Corinth.  This also means that Christianity is not a later creation or fabrication of the disciples in the writing of the gospels, since this creed shows us that Christian doctrine was circulating immediately after the crucifixion of Jesus before anything was canonically written down yet.

John Meier: “The vocabulary of handing on a receiving was used in the ancient world by philosophical schools, Gnostic literature, and rabbinic circles (e.g., m. ‘Abot 1:1) to designate important traditions that were carefully passed down from teacher to student.” [The Circle of the Twelve: Did It Exist during Jesus’ Public Ministry?, Journal of Bib. Lit., 1997.]

Christopher Bryan (NT professor at Sewanee): “The words with which Paul speaks of passing on this revelation are carefully chosen: delivered and received echo the language in which both Greek philosophical tradition and the rabbinic schools spoke of the faithful handing on of a true teaching.” [The Resurrection of the Messiah (Oxford, 2011), 48.]

This article was pieced together off of information from beliefmap.org and was republished with permission.