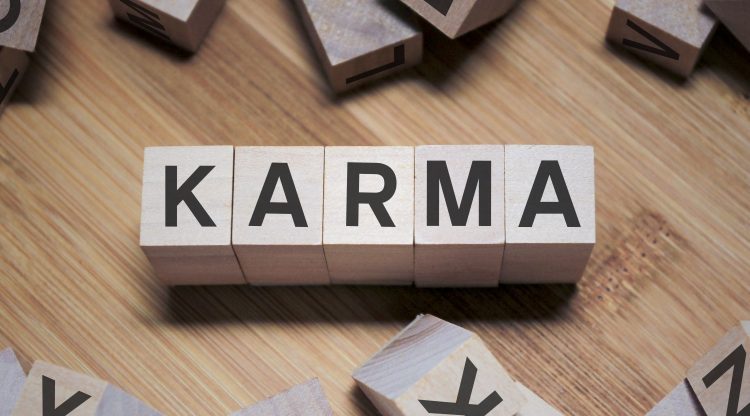 By Marcia Montenegro|  The Hindu word “karma” is used more and more often with a Western twist in meaning. Often people say it to mean “luck” (good or bad) or even as a gleeful expression of revenge. I have seen this word on bumper stickers and heard it said lightly, as a joke. I myself once sincerely held a belief in karma when I was following Eastern and New Age beliefs and often thought of how someone who had wronged me would eventually suffer karma for what they had done to me.

By no means, however, is the term or concept of karma a joke. Others — including some Christians — try to justify the term karma with the idea of consequences as seen in Galatians 6:

So how to view “karma?” First, what is karma?

Reincarnation is “Generally speaking, the belief that one lives many lives, returning after death to life in another body, time, and place. This belief is an essential part of Hinduism. One accumulates karma, which are the actions of a person in life, which will influence the person’s subsequent lives…..In Hinduism, one can return as an animal or insect (called ‘transmigration’), but in Western views of reincarnation, one returns as a person.” – From CANA document at http://bit.ly/1XiASRD

Reincarnation, a doctrine of Eastern belief systems, is however opposed to this:

“For it is appointed unto man to die once, and then the judgment.” Hebrews 9:27

The consequences in karma are mechanical and ongoing; there is no forgiveness or way to avoid such consequences except, according to some teachings, through the actions of a guru who claims to do it for you in this life or possibly by performing a ritual. Even then, while a temporary erasure has been done, karma continues and will continue in future lives.

Here is advice from a Hindu site on Prayaschitta, which is penance:

“The doctrine of karma is complex, with many subtle distinctions and categories. But for the purpose of understanding penance, we may consider karma as two-fold: the meritorious or good, called punya or sukarma in Sanskrit; and the undesirable or bad, termed papa or kukarma….[….]….In the broadest sense, the entire system of reincarnation is an elaborate form of penance, for we are born with the body, family, circumstances and even longevity and propensity toward disease brought about by our past actions. Prayaschitta is, however, an act of limited aim, intended only to mitigate or avoid altogether the karmaphala, “fruit of action,” of some action we have taken in this lifetime.

Actions from our past lives are not considered within reach of ordinary prayaschitta. The karmas of past lives can only be assuaged or erased altogether by intense tapas or austerities under the guidance of a guru, or by the extraordinary grace of God. Manu Dharma Shastras 11.54 states, “Penances, therefore, must always be performed for the sake of purification, because those whose sins have not been expiated are born again with disgraceful marks.” – From http://bit.ly/1Rd42Sr

Also, one must ask, what values or standards is karma based on?

Answer: The values found in Hindu teachings, which are diverse and complex. Hinduism is not one monolithic religion but rather a set of wide and multifarious beliefs depending on which particular texts, gurus, sects, schools of thought, and even the region of India they stem from.

The need for a sinless sacrifice of another to pay the penalty for sin is absent in Hinduism; if there is a penalty it is paid by each person through karma. The only release is moksha — liberation from the cycle of death and rebirth — dependent on one’s actions and spiritual progress through many lives.

Sowing and Reaping in Galatians

What is the meaning and point of the Galatians verses about reaping what one sows?

The Expositors Greek New Testament comments on verse 8:
Quote== Every action produces an effect on the character of the actor corresponding as exactly to its motive as the fruit to the seed. If it springs from selfish desire, it stimulates the growth of evil lusts, and issues in a harvest of inward corruption. If, on the contrary, it be done in obedience to the spirit, it quickens spiritual growth, and issues eventually in a harvest of eternal life. The heart of man resembles a field in which he sows, by the mere exercise of his will, a future harvest of good or evil.==See this and other commentaries at http://bit.ly/1OI4qrz

This passage in Galatians is written to Christians and is part of an exhortation as we see in the next 2 verses:

“Let us not lose heart in doing good, for in due time we will reap if we do not grow weary. So then, while we have opportunity, let us do good to all people, and especially to those who are of the household of the faith.” Verses 9 and 10

This has nothing to do with the popular notion of “what goes around comes around,” but rather that our deeds are either undertaken to gratify the flesh, that is, the fallen nature, and will end destructively, or they are done according to the power of the Holy Spirit and for God’s glory, leading to results that have eternal value in accordance with eternal life.

From the Pulpit commentary on this passage:
“That is, he that expends thought, time, effort, money, upon the furthering, in himself and in others, of the fruits of the Spirit, shall receive, from that Holy Spirit to whose guidance dwelling within him he resigns himself, that quickening of his whole being, body, soul, and spirit, for an everlasting existence in glory, which it is the proper work of that Divine Agent to effect.” – From http://bit.ly/1OI4qrz

The contrast is between sowing to the flesh (fallen nature) and sowing to the Spirit, the flesh vs. the Holy Spirit being a common theme in Paul’s letters. “Flesh” here does not mean the body, as though the body is bad, nor is it about one’s spirit being good, since it’s about the Holy Spirit. Nor is it denouncing pleasure. Rather, this is about living by/pleasing the fallen nature, i.e., the sinful nature, vs. living by the Holy Spirit. The results will be different depending on which way one chooses.

The verses below are often used by those who believe in reincarnation to claim that the Bible teaches it. I heard many of these in the New Age, but some Christians also ask about these as well.

The article with the above excerpt continues to give detailed refutations to these verses to show how they do not support a belief in reincarnation.

Reincarnation is alluring in the West because it focuses on self; and many people enjoy the idea of past lives. But reincarnation has a cruel side: it means that what happens to someone is what they deserve from a past life (karma), so everything is their fault. Think about what this means for victims of rape, child abuse or murder. Those who believe in reincarnation often will immediately wonder, “What did that person do (in a previous life) to have that happen?”

It is important to keep in mind that belief in reincarnation is a spiritual deception, not an intellectual one.

Should Christians Use the Word Karma?

While it is certainly true that there are consequences for one’s actions and often one does “sow what one reaps” in this life, equating karma with the concepts found in Galatians of sowing and reaping, or elsewhere in Scripture, is invalid.

Moreover, using the word karma may give others the idea that the Christian agrees with the Hindu concept of karma or somehow endorses it. There is no good reason for Christians to use this word except as a platform to contrast it with the Gospel of Jesus Christ.

For Those Who Believe in Reincarnation: Karma and Christ

The differences between karma and Christ are deeper than any ocean or as distant as galaxies we don’t even know exist. In Hinduism, the way out of karma and reincarnation must be through one’s deeds — the various Yogas — and realization of one’s true nature (which is allegedly divine) among other possible paths and teachings, all very complex. This realization only comes after many lifetimes and is dependent on one’s own actions to reach moksha, liberation from the cycle of death and rebirth, both in Hinduism and in Buddhism.

In contrast, God tells man that due to man’s separation from God due to sin and man’s inability to bridge that gap by his own deeds, Jesus came once for all to offer Himself on the cross to pay the penalty for sins. Through faith in Jesus, knowing that His payment makes the way to God possible, one has forgiveness of all sins and inherits eternal life.

God sent Jesus who willingly laid down His life on the cross to take the penalty for sins so that all who believe in Him have eternal life. Jesus died “once for all.” It was an act with the finality that brings eternal results. Even if one were to hypothetically have thousands of reincarnated lives, he or she could never be good enough or do enough good things to earn salvation.

“For it was fitting for us to have such a high priest, holy, innocent, undefiled, separated from sinners and exalted above the heavens; who does not need daily, like those high priests, to offer up sacrifices, first for His own sins and then for the sins of the people, because this He did once for all when He offered up Himself. For the Law appoints men as high priests who are weak, but the word of the oath, which came after the Law, appoints a Son, made perfect forever.” – Hebrews 7:26-28

Once For All :
“But when Christ appeared as a high priest of the good things to come, He entered through the greater and more perfect tabernacle, not made with hands, that is to say, not of this creation; and not through the blood of goats and calves, but through His own blood, He entered the holy place once for all, having obtained eternal redemption.” – Hebrews 9:11, 12

Does karma offer anyone “no condemnation?” No, it does not. Only Christ can do that through faith in His work on the cross:

“Therefore there is now no condemnation for those who are in Christ Jesus. For the law of the Spirit of life in Christ Jesus has set you free from the law of sin and of death. For what the Law could not do, weak as it was through the flesh, God did: sending His own Son in the likeness of sinful flesh and as an offering for sin, He condemned sin in the flesh, so that the requirement of the Law might be fulfilled in us, who do not walk according to the flesh but according to the Spirit.” – Romans 8:1-4

This article was originally featured on the website of CANA and was republished with permission.

What Does “Faith” Mean? Is It Belief Without Evidence?