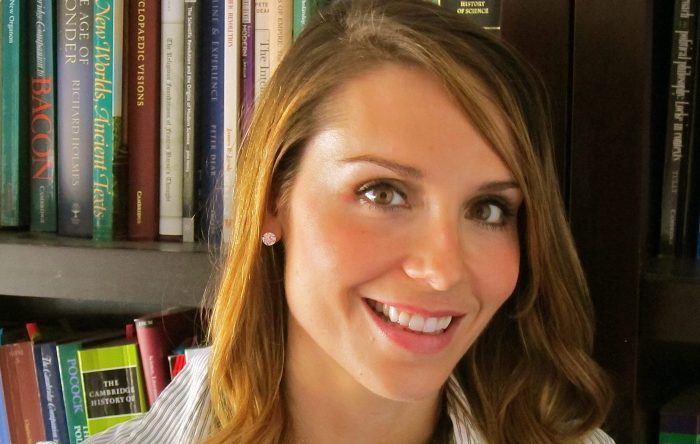 By James Bishop| Sarah Irving-Stonebraker is a Senior Lecturer (with tenure) in Modern European History at Western Sydney University in Australia (1). Stonebraker’s first book, Natural Science and the Origins of the British Empire, was awarded The Royal Society of Literature and Jerwood Foundation Award for Non-fiction. Her book provides an academic treatment on England’s colonial empire and how it became tied to the Protestant redemptive project of restoring humanity’s original dominion over nature.

Her book has been dubbed “a masterfully written history of the construction of the British Empire,” as per one of the judges of the Jerwood Award. Before joining the University of Western Sydney, Stonebraker was a Junior Research Fellow at Wolfson College, Oxford University, and then Assistant Professor at Florida State University.

Her initial skepticism of religion was quite at home during her childhood; she grew up in “a loving, secular home, and arrived at Sydney University as a critic of “religion.”” Though she came to see the problems of grounding human value on atheism much later, she felt that she did not need to have religious faith, or belief in God, to be able to ground her identity or values. Also, at the tender age of eight, she knew that she wanted to be a historian, and study history at Cambridge (2).

However, looking back at her university career, she says that her identity “lay in academic achievement, and my secular humanism was based on self-evident truths. As an undergrad, I won the University Medal and a Commonwealth Scholarship to undertake my Ph.D. in History at King’s College, Cambridge. King’s is known for its secular ideology and my perception of Christianity fitted well with the views of my fellow students: Christians were anti-intellectual and self-righteous” (3).

No human value on Atheism

Stonebraker would then meet the philosopher and atheist public intellectual, Peter Singer. Singer has been quite controversial given that he has argued, or forwarded the notion, that some forms of animal life have more worth than some human life. According to Stonebraker, after having graduated from Cambridge, she was elected to a Junior Research Fellowship at Oxford, and there she attended “three guest lectures by world-class philosopher and atheist public intellectual, Peter Singer.”

She realized the huge issues that an atheistic philosophy presented to the question of human worth, “The natural world yields no egalitarian picture of human capacities. What about the child whose disabilities or illness compromises her abilities to reason? Yet, without reference to some set of capacities as the basis of human worth, the intrinsic value of all human beings becomes an ungrounded assertion; a premise which needs to be agreed upon before any conversation can take place.”

Stonebraker remembers leaving Singer’s lectures with great uneasiness because she felt committed “to believing that universal human value was more than just a well-meaning conceit of liberalism. But I knew from my own research in the history of European empires and their encounters with indigenous cultures, that societies have always had different conceptions of human worth, or lack thereof.

The premise of human equality is not a self-evident truth: it is profoundly historically contingent. I began to realise that the implications of my atheism were incompatible with almost every value I held dear.”

She then, more by chance than anything else, wondered into the theology section at her library, “I noticed that my usual desk in the college library was in front of the Theology section,” and with an “awkward but humble reluctance” she ventured forth, finding a book of sermons by philosopher and theologian Paul Tillich.

“As I read,” she says, “I was struck at how intellectually compelling, complex, and profound the gospel was.” This was a good start, but although she was at least attracted to the ideas and views presented by Tillich she still wasn’t convinced.

Then a couple of months later she was invited to a dinner for the International Society for the Study of Science and Religion. There she found herself sitting next to Andrew Briggs, a Professor of Nanomaterials and a Christian. During that dinner, Briggs asked her whether she believed in God. Stonebraker remembered fumbling in response, and noticing her confusion, Briggs asked,

“Do you really want to sit on the fence forever?”

It was that question, explains Stonebraker, that “made me realise that if issues about human value and ethics mattered to me, the response that perhaps there was a God, or perhaps there wasn’t, was unsatisfactory.”

The good works that many Christians did, whether that be small things or through the efforts of self-sacrificial giving, warmed Stonebraker’s heart, “With the freedom of being an outsider to American culture, I was able to see an active Christianity in people who lived their lives guided by the gospel: feeding the homeless every week, running community centres, and housing and advocating for migrant farm laborers.”

It wasn’t much later, just shy of her 28th birthday she explains, that she visited a church for the first time as someone earnestly seeking God. The experience at the church was huge for her, “Before long I found myself overwhelmed. At last I was fully known and seen and, I realised, unconditionally loved – perhaps I had a sense of relief from no longer running from God.

A friend gave me C.S. Lewis’s Mere Christianity, and one night, after a couple months of attending church, I knelt in my closet in my apartment and asked Jesus to save me, and to become the Lord of my life.”

Stonebraker says that from that point onwards she begun looking far more into theology. She thus read the Bible and explains that she explored the views presented by the notable theologians such as Reinhold Niebuhr, Paul Ramsey, and F.D. Maurice. Having rigorously engaged these writers she soon discovered that “Christianity, it turned out, looked nothing like the caricature I once held.”

In fact, she found that placing faith in God did not require the suspension of her cognitive faculties, “I found the story of Jacob wrestling with God especially compelling: God wants anything but the unthinking faith I had once assumed characterized Christianity. God wants us to wrestle with Him; to struggle through doubt and faith, sorrow and hope. Moreover, God wants broken people, not self-righteous ones.

And salvation is not about us earning our way to some place in the clouds through good works. On the contrary; there is nothing we can do to reconcile ourselves to God. As a historian, this made profound sense to me. I was too aware of the cycles of poverty, violence and injustice in human history to think that some utopian design of our own, scientific or otherwise, might save us.”

She further observes just how radical Christianity in fact is. It was radical in how God, the very creator of the universe, became “fully human in Jesus, God behaved decidedly unlike a god.” It was also the incredible and radical love demonstrated in such an act on God’s behalf, “Why deign to walk through death’s dark valley, or hold the weeping limbs of lepers, if you are God?

Why submit to humiliation and death on a cross, in order to save those who hate you? God suffered punishment in our place because of a radical love. This sacrificial love is utterly opposed to the individualism, consumerism, exploitation, and objectification, of our culture. To live as a Christian is a call to be part of this new, radical, creation. I am not passively awaiting a place in the clouds.”

As she learnt more about God’s radical love she discovered that “To live as a Christian is a call to be part of this new, radical, creation. I am not passively awaiting a place in the clouds. I am redeemed by Christ, so now I have work to do. With God’s grace, I’ve been elected to serve – in whatever way God sees fit – to build for His Kingdom. We have a sure hope that God is transforming this broken, unjust world, into Christ’s Kingdom, the New Creation.”

“Just as radical, I realized, was the new creation which Christ began to initiate. This turned on its head the sentimental caricature of ‘heaven’ I’d once held as an atheist. I learned that Jesus’ resurrection initiated the kingdom of God, which will “bring good news to the poor, release the captives, restore sight to the blind, free the oppressed.” (Luke 4:18) To live as a Christian is a call to be part of this new, radical, creation. I am not passively awaiting a place in the clouds.

I am redeemed by Christ, so now I have work to do. With God’s grace, I’ve been elected to serve – in whatever way God sees fit – to build for His Kingdom. We have a sure hope that God is transforming this broken, unjust world, into Christ’s Kingdom, the New Creation.”

3. Stonebraker, S. 2017. How Oxford and Peter Singer drove me from atheism to Jesus. Available.

Share2K
Tweet
Pin4
2K Shares
Enjoy this article? Take a moment to support us on Patreon!

How Evidence For The Resurrection Led Dr. Qureshi From Islam Apologist...