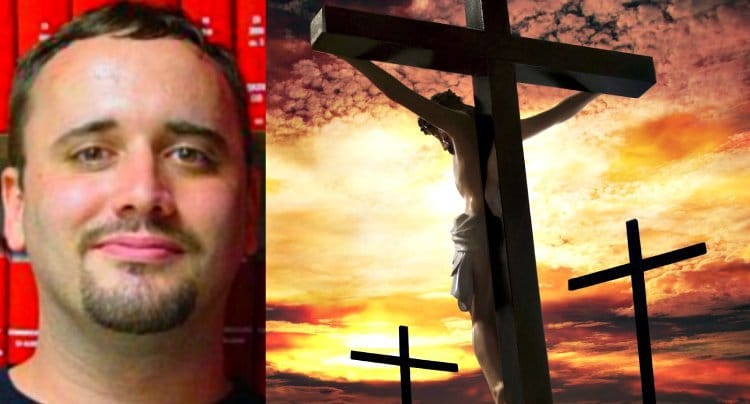 By James Bishop| This is the testimony of former atheist Darrin Rasberry. He used to write for John Loftus’ blog site Debunking Christianity, and is currently a math teacher at Ellsworth Community College.

Disclaimer: I searched Debunking Christianity (DC) and it appears that this testimony is true (it took place in 2011). To this end John Loftus (admin at DC) commits the No-True-Scotsman fallacy by accusing Rasberry in saying that he “was never an atheist in the first place.” Nevertheless, according to Rasberry:

“Some time last week, I realized that I could no longer call myself a skeptic. After fifteen years away from Christianity, most of which was spent as an atheist with an active, busy intent on destroying the faith, I returned to a church (with a real intention of going for worship) last Sunday. Although I know I may struggle with doubt for the rest of my life, my life as an atheist is over.

The primary motivator in my change of heart from a Christ-hater to a card-carrying Disciples of Christ member was apologetic arguments for God’s existence.

Those interested in these arguments may pursue them in the comments section, but I don’t want to muddle this explanation up with formal philosophical proofs. Briefly, I grew tired of the lack of explanation for: the existence of the universe, moral values and duties, objective human worth, consciousness and will, and many other topics.

The only valid foundation for many of those ideas is a personal, immaterial, unchanging and unchangeable entity. As I fought so desperately  to come up with refutations of these arguments – even going out of my way to personally meet many of their originators, defenders, and opponents  – I realized that I could not answer them no matter how many long nights I spent hitting the books.

The months of study rolled on to years, and eventually I found an increasing comfort around my God-believing enemies and a growing discontent and even anger at my atheist friends’ inability to kill off these fleas in debate and in writing, an anger that gave birth to my first feeling of separateness from skepticism after reading comments related to a definitively refuted version of the Christ Myth theory, the idea that Jesus Christ never even existed as a person at all.

Line after line after line of people hating Christianity and laughing at its “lie,” when solid scholarship refuting their idea was ignored completely.

It showed that the motive of bashing and hating Christianity for some skeptics wasn’t based in reason and “free thinking” at all, although it would be unfair to lump many of my more intellectually rigorous and mentally cool skeptic friends in this way.

As time went on, I reverted the path I traced after giving up Christianity so long ago: I went from atheist to agnostic to … gulp … *leaning* in the direction of God, to finally accepting that he very well could exist, and then to coming out and admitting (quietly) He did exist.

After considering Deism (the belief in a God who abandons His creation), Islam, Hinduism (yes, Krishna, don’t laugh), Baha’i, and even Jainism briefly, I have decided to select Christianity due to its superior model for human evil and its reconciliation, coupled with the belief that God interacted with man directly and face-to-face and had *the* crucial role in this reconciliation.

There are problems that I have with adopting any specific layout of Christianity, which explains my current attendance at what many of you may consider to be a very liberal denomination in the Disciples of Christ. Their aim is to unify all believers in the essentials, while leaving nonessential beliefs (however important) up to the member to decide.

The essentials are about all I can honestly grasp at this moment. At its philosophical core, I prefer the Reformed (Calvinist) tradition, perhaps by a long shot, but there are many very serious practical issues I can’t resolve. Conversely, Catholicism is a practical Godsend (pardon the term) but I have problems with their philosophy.

And I don’t agree with many political issues of either of those branches or the majority of Christian branches in general. I have a long way to go and I know the many problems religion has in general and that Christianity has in specific, but they do not exceed the fatal problems in skepticism.

I understand that this may confuse and even upset many of the friends I’ve had for a long time, both in my personal life and in the years-long journey I’ve made as a skeptic-to-believer. Christianity is not without its critics, and given the absolutely shameful way many “Christians” have treated homosexuals, drug addicts, people of other faiths (and of no faith) and races, and even people of different Christian denomination, and given the often intellectually embarrassing way we’ve handled science and philosophy, I would not blame you for a second if you did not want to associate with me based on the track record of those who claim to believe similarly to what I believe now.

I am the same Darrin as I was before, a math teacher, a storm chaser, D&D gamer, drunk philosopher, a lover of beer that’s too strong and spice that’s too hot,  and all the rest of it. I just hope to be a little cleaner, more honest, more Christ-like.

I won’t throw the Bible at you and I won’t preach to you with wild eyes and a million mile stare about how you shouldn’t be gay or how you should focus on what Hitch calls the “eternal theme park.

This is all the evangelism you’ll get from me (unless you ask after I’ve had too much Guinness) and I do hope it’s quite enough to motivate you to study the evidence for God’s existence yourself and to read the Bible without the predetermined idea of tearing it apart. Come over to the dark side; we have tea and cookies.”

Ultimate Object and the Journey To Orthodoxy.

Share25K
Tweet
Pin10
25K Shares
Enjoy this article? Take a moment to support us on Patreon!