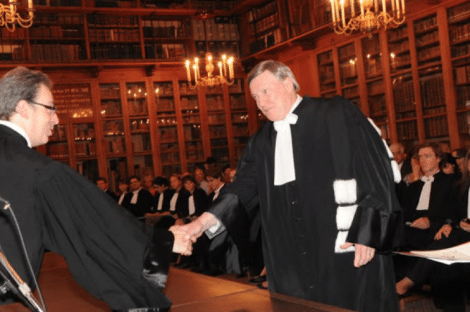 By James Bishop| John Montgomery, 85, is the Distinguished Research Professor of Philosophy at Concordia University, Wisconsin, and continues to work as a barrister specializing in religious freedom cases in international Human Rights law. He is also the director of the International Academy of Apologetics, Evangelism & Human Rights, and is the editor of the theological online journal Global Journal of Classical Theology.

Montgomery has 11 earned degrees in multiple disciplines including philosophy, librarianship, theology, and law. He became a Christian in 1949 as an undergraduate student majoring in the classics and philosophy at Cornell University (1). His legal specialty is the International and Comparative Law of Human Rights and he regularly pleads religious freedom cases before the European Court of Human Rights.

Montgomery’s apologetics work, specifically evidentialist apologetics, has focused heavily on establishing the divinity of Jesus Christ through assessing the historical and legal evidences for the resurrection (2). His work has influenced many other well-known and widely read apologists including Josh McDowell, Gary Habermas, Don Stewart, Francis Beckwith, Ross Clifford, Terry Miethe, Loren Wilkinson, and others (3).

Even the contemporary apologist William Lane Craig, widely seen as the forefront of Christian apologetics today, has studied under Montgomery in pursuit of his double doctorate (4). Montgomery has himself debated a number of opponents including American Atheist Madalyn Murray O’Hair (1967), ethicist Joseph Fletcher (1971), Mark Plummer (1986), humanist George A. Wells (1993), and Gerd Ludemann of the Jesus Seminar.

According to philosopher and apologist J.P. Moreland, “The name of John Warwick Montgomery deserves to be mentioned alongside that of C.S. Lewis and Francis Schaeffer as one of the 20th century’s most articulate defenders of historic Christianity.”

Montgomery’s journey to faith begun when, while an atheist, he met a fellow student by the same of Herman Eckelman, “He witnessed to students and presented a strong apologetic for the Christian faith and he got me on the subject of religion and he had a fine library and he loaned me books and my questions and objections were trivial in comparison to the answers that were available and so by the end of my freshman year I was converted” (5).

Montgomery became a Christian and “continued in Intervarsity Christian Fellowship and witnessed on campus.” This was the beginning of his apologetic career, and he has detailed more of his transition in a book, Evidence For Faith, which consists of essays penned by him and other people who were impacted by Eckleman’s ministry at Cornell.

Montgomery was surprised when he first began investigating the historicity of the gospel sources, “in the case of the Gospel records, they are exactly where we would expect them to have been and they show on their face no reason not to accept them as admissible documents.”

At the same time he doesn’t want to be too simple in making his case, “That doesn’t mean that their weight, the weight of evidence has been established, that you have to go into independently, but at least the documents go in” (6). Montgomery was influenced by a trio of Christian writers who all made a strong case for the truth the resurrection of Jesus Christ, “Edward John Carnell’s Introduction to Christian Apologetics was very important to me. So was Wilbur Smith’s classic Therefore, Stand. And C.S. Lewis’s broadcast talks were being published at that time and I was very much influenced by that.”

With the case for Christianity having been made by his college friend Herman Eckelman, Montgomery “found himself forced to consider seriously the claims of Jesus Christ in the New Testament in order to preserve big intellectual integrity. After no mean struggle he acknowledged his rebellion against God and asked His forgiveness” (7).

He has since branded himself as an evidentialist, “An evidentialist is a person who believes that a Christian and non-Christian are living in the same world and therefore they encounter the same facts and that it is possible to present facts in evidence to the non-Christian that will show him that the case for Christianity is far more persuasive than any contrasting view” (8).

His study of religion also showed that there were some major differences between Christianity and the others especially when it comes down to a matter of evidence, “the case for Christianity is a synthetic case. It a case based upon facts and therefore there is no choice but to go out and check the facts. Fascinatingly enough, other religions present largely meaningless claims. These are claims that can’t be tested. They can neither be confirmed nor disconfirmed” (9).

Montgomery, very much involved in legal matters throughout his life, certainly favours the need to test claims as “this connects with legal evidence because legal evidence is based on factual material… that’s exactly the kind of approach that seems to be most effective when dealing with the case for Christianity” (10).

Thus Montgomery found the evidence of the post-death resurrection appearances of Jesus to be quite compelling, “This was a public event, the kind of thing that could be checked out and fascinatingly the opponents of Jesus, the ones who had brought about his crucifixion and therefore had the means, motive, and opportunity to disprove the claims being made never attempted to do this. The reason is, of course, is that they couldn’t, they had no basis for doing that so. All of this could be put together and presented, I believe, quite rapidly” (11).

He points to Paul’s early writings (“within a generation” of the events) and specifically the early Pauline creed found in 1 Corinthian 15 that shows the resurrection belief to be extremely early. Likewise, the gospels themselves provide “first hand reports of post-Easter appearances and these show Jesus eating with his disciples, the road to Emmaus, and the doubting Thomas being able to touch the nail prints in his hand and to touch the wound in his side, etc” (12).

Of further interest to Montgomery is the biblical story of Noah’s Ark (13). He would spend two full years researching the claims of evidence for Noah’s Ark of which took him through two thousand years of reports, sightings and claims, as well as two ascents up Mount Ararat. He first climbed the mountain in August, 1970, on the South Face and again in the Summer of 1971 on the North Face.

Though the Genesis flood has a number of interpretations Montgomery defended a local Flood in his book, The Quest for Noah’s Ark (1972). He was also a contributing scholar on two film documentaries on the topic Noah’s Ark and the Genesis Flood (1977), and In Search of Noah’s Ark (1976).

Since Montgomery was previously an atheist he has valuable insight when it comes down presenting the unbeliever with the Gospel, “It really is important to put yourself in the position of the unbeliever to try and understand him, to empathize, and if possible to get at how the person has arrived at this point… [it is important] getting some background in logic and critical thinking so that one can think clearly and recognize the logical and rational errors because if you can’t do that you are not really in a position to see where the unbeliever is off base” (14).

People are not born apologists. This is a learned skill and it takes some work for the lost and if we are really concerned for the lost we ought to feel compelled to do this” (15).

Montgomery is the author of over 100 scholarly journal articles and more than 50 books in English, French, Spanish, and German. One can access some of his articles at his website.