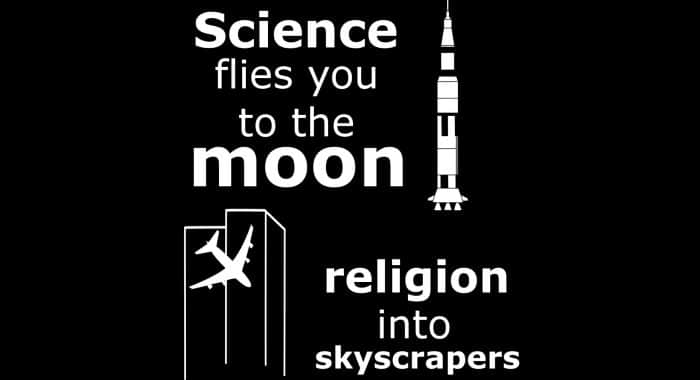 By James Bishop| Some people suppose that if one does science, or if one is a practicing scientist, he or she will likely end up an atheist. Generally when people think of the term “scientist” or “science” they usually contemplate the likes of a biologist or a physicist working in a lab somewhere. This is not an incorrect view although it is certainly a limited one. My hope with this essay is show to why the claim that “Science makes one an atheist” is based on a misunderstanding of science, is misleading, and is often not the case.

As a theist, I would find it hard to dispute that this is sometimes the case. After all, all one need do is look at the likes of Richard Dawkins (who admittedly is a brilliant scientist) and the late William Provine to support the claim. Obviously other examples exist of atheists who are scientists, and who tend to claim that their science is the reason behind their adoption of atheism. By atheism I mean the view that God and the supernatural does not exist.

However, any observer should note that such a deduction is not strictly a scientific one as opposed to feeding in scientific data and theories into a philosophy already held by the atheist (mostly materialism or naturalism, and seldom, but sometimes, nihilism) or person in question. Dawkins, for instance, puts particular emphasis on evolution as being the knockout blow for belief in God as well as the uniqueness and significance of human beings. This would be a view shared by arguably most atheists.

However, views such as these have not gone unchallenged by other scientists and academicians in other fields of expertise. An increasing number of theists, many of whom are scientists themselves, have argued that atheists drawing such conclusions hold to irrational philosophies like naturalism and determinism, and that evolution need not be a disproof of God, or lessen the probability of God’s existence and/or involvement in the development of biological life on the planet.

A good example of scientists promoting this view can be found at BioLogos, the theistic evangelical think tank of Francis Collins, a former atheist himself.

A devout geneticist and evolutionary biologist such as Collins would look at the exact same data that Dawkins does but draw significantly different conclusions. They really do. According to Collins,

“If humans evolved strictly by mutation and natural selection, who needs God to explain us? To this, I reply: I do… Freeing God from the burden of special acts of creation does not remove Him as the source of the things that make humanity special, and of the universe itself. It merely shows us something of how He operates” (1).

“The universe we observe has precisely the properties we should expect if there is, at bottom, no design, no purpose, no evil and no good, nothing but blind, pitiless indifference” (2).

Irrespective of whose deduction is correct, we can note that none of these are scientific statements and that they are in fact entirely philosophical. Collins and Dawkins, both brilliant scientists, are examining the exact same data and coming to different philosophical conclusions.

Theistic philosophers have too engaged this question in some depth. William Lane Craig has argued that evolution, given the immense improbabilities involved, should be considered evidence for God’s superintendence, whereas Alvin Plantinga has formulated the evolutionary argument against naturalism which presupposes the truth of Darwinian evolution and that it actually undercuts atheism. Should Plantinga’s argument follow, it would be the ultimate blow to atheists given how significant evolution is to them, almost like the Holy Koran is to the Muslim.

Nonetheless, without becoming sidetracked, the point I am trying to make is that an individual’s philosophy on which she interprets other sources/domains of information (including the sciences, metaphysics, epistemology etc.) is the real determining factor of whether or not she will believe in God or not. Science can play an influential role in this process, but it is not the science that determines it.

This is why atheists, usually of the internet variety, who respond to the questions as to why they do not believe in God by saying “Because science” just seem so naive and uninformed about the topic. This is just the truth, not an attempt for me to sound pejorative or condescending towards atheists.

I also think that the explanatory scope of the hard sciences should instill humility in atheists and scientists who are atheists for far too often they tend to dogmatically assume the irrational and self-defeating position of scientism. This is the philosophical view that we should believe only what can be proven scientifically. In other words, science is the sole source of knowledge and the sole arbiter of truth.

Chemist Peter Atkins is a good example of overestimating science’s explanatory scope to include phenomena beyond science’s ability to explain. Why? Because science, operating on methodological naturalism, methodologically deals with the natural world, natural explanations, and phenomena. Anything beyond this, which includes huge domains of knowledge in the philosophies (think epistemology, metaphysics, and moral philosophy) and spiritual domains (theological truths, the existence of gods, God, and supernatural entities and realms), among others, are beyond science’s scope.

That’s not me making this up, this is just the way science is. But if we were to go on the claims of some atheist scientists we would have to do away with entire domains of knowledge many of which not only seem obvious (i.e. metaphysical beliefs such as that the external world exists, that other minds exist, that animals and other human beings have conscious experiences etc.) but also of which science itself requires to operate (which is one of several reasons why scientism is self-defeating). The result of this would be an incomprehensible and reductionist existence of which we would likely be unable to live consistently with on both an experiential and logical level.

Note that none of what I have just stated here would be controversial to most scientists. This is because what I have stated is not an assault on science or on the scientific enterprise, rather it is a critique of self-defeating philosophical deductions from science that most scientists, in my experience, do not hold to, and that are clearly mistaken.

But let’s move beyond the framework we’ve just outlined above and to the work and research of Dr. Elaine Ecklund, a Professor of Sociology at Rice University, who has produced findings that challenge the idea that it is necessarily the science itself that makes scientists atheists. She examined the religious views of elite scientists from top U.S. research universities, and suggested that “for the majority of scientists I interviewed, it is not the engagement with science itself that leads them away from religion. Rather their reasons for unbelief mirror the circumstances in which other Americans find themselves: they were not raised in a religious home; they have had bad experience with religion; they disapprove of God or see God as too changeable” (3).

In yet a further study by Ecklund, alongside colleague Christopher Scheitle, she questioned 2198 faculty members from a variety of academic disciples, including those within the fields of physics, chemistry, biology, sociology, economics, political science, and psychology, from 21 elite American research universities (4).

Overall, 75% of professors contacted by the pair of researchers completed the survey, and it was found that among the different disciplines, disbelief in the existence of God was not correlated with any particular area of expertise. The study suggested the following (the percentages represent atheist representation):

These figures seem to be more or less the same as those found in a 1969 study, the Carnegie Commission National Survey of Higher Education: Faculty Study, which suggested that only approximately 35% of scientists did not believe in the existence of God. Going on those statistics it would seem that disbelief in God among scientists hasn’t changed all that much despite many scientific developments since. Ecklund’s study nonetheless found that several other factors played a role in disbelief, for example, scientists who were immigrants disbelieved in God to a greater degree than those who were born and raised in America.

The study also found that scientists come disproportionately from non-religious or religiously liberal backgrounds compared to the general population. This suggests that at least some part of the difference in religiosity between scientists and the general population is probably due to religious upbringing rather than scientific training or institutional pressure to be irreligious.

In a further study by the Pew Research Center results suggested that:

This would suggest that 51% of scientists believe in some form of a divine being or higher power whereas 41% do not. This indicates that atheists do not command the majority of scientists. Again, 41% could be considered in the neighbourhood (although a slight increase) of the results of the 1969 study by the Carnegie national survey.

A third, and final reason, one could challenge the science=atheist notion is that many scientists actually base their belief on their science, or suggest that it is their science that has enhanced their faith in God. Consider the words of Darrel Falk, a professor of biology, who argues that nature and biological development testifies to “God’s masterful plan and ongoing activity” (6).

Again, this is not a scientific statement by any means although it does show how two people can look at the same data and come to different conclusions. Many other scientists such as Alister McGrath, John Lennox, Neil Shenvi, Dana Oleskiewicz etc. would likely argue similarly. Moreover, this fact is not a proof of the theistic position, or a disproof of the atheistic view, but what it is a disproof of is that doing science will always result in converts to atheism, a point succinctly put by  Lennox himself when he noted that “Atheism is not the automatic default position for all thinking people who hold science in high regard” (7).

Thus, I think that the science=atheism view must be challenged. Why? Well, because the evidence demands it.

1. Collins, F. 2008. The Language of God: A Scientist Presents Evidence for Belief.

Lawyer Explains Why Belief In God Is Not Childish