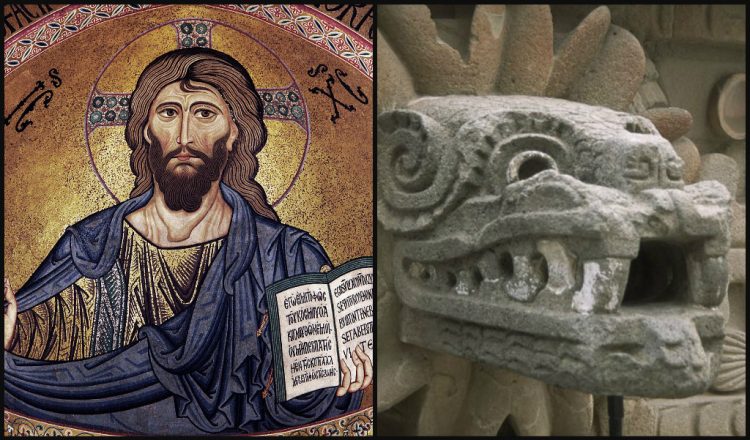 J. P. Holding|  Of all of our “pagan copycat Christ” papers so far, this one has got to be, and probably always will be, the most unusual — because we are actually arguing against two sides with different ideas! But it turns out the same simple solution sinks them both.

On the one hand, we have Christ-myth advoctes, who affirm that Quetzalcoatl (hereafter “Quetz” or Q), the ancient Mesoamerican deity, is one of many copycat Christ figures. How that info got to Christians across the Atlantic we can only guess (though some suggest Phoenicians, and rely on the fabulous fabricator Kersey Graves for the information that New World data was found in the library of Alexandria).

On the other hand, we also have several popular Mormon apologists (professional Mormon apologists do not follow on this) who willingly accept the parallels, and use them to support their own view that Christ visited the Americas. The two parties wouldn’t have a kind word to say to each other, but in a real sense they are partners here, and we are in the odd position of having to respond to both of these at once.

Some preliminary remarks are in order about this rather complex character of Quetz.

The popular Mormon apologetic work New Evidences of Christ in Ancient America [130-1] notes six historical stages and three variants in the history of Q. In some of these stages, Q is an admittedly brutal and unwholesome sort of thug. What the book calls Variant 4 is the one that is “preferred” for a Christ-parallel, having “a projected birth date at 1 B.C. and archaeological and codical evidence from the Postclassical period of Mesoamerica (ca. A.D. 900-1525).” Slightly later variants make Q a “royal priest-king” (mid-first century) and then a “war serpent” (second century).

These are taken to be corruptions and elaborations of the “true” Q. Adding to the mix is that many persons in later history were named after Quetz (as indeed many in Latino cultures name their child “Jesus”) and some of their “adventures” are recorded as well.

Our general answer to almost all of the parallels is a certain methodological surd which raises questions about the validity of any parallels between Jesus and Quetz. Another Mormon apologetic work by Allen, Exploring the Lands of the Book of Mormon, states the matter incompletely and in summary:

All that is known about Quetzalcoatl comes in the form of secondary sources. All of the written information about Quetzalcoatl that is available today has an origin in the writings of 16th-century Spanish chroniclers. As mentioned earlier, the Spanish chroniclers were those Spanish conquerors, Catholic missionaries, or natives, like Ixtlilxochitl, who had to use as source material the Aztecs and Mayas who were living at the time of the Conquest.

Allen then states that this may mean that the material could be “biased from an Indian point of view in an attempt to protect the religious beliefs or biased on the part of the Spaniard in an attempt either to correlate the Mexican history with Christianity or to present the opposite point of view and to equate the history of the Mexicans with workings of the devil.”

This is a very important admission. What Allen reports in brief is related in far more detail, and far more strongly, by David Carrasco’s Quetzalcoatl and the Irony of Empire, written by a specialist in Mesoamerican religions. Carrasco shows that the “bias” and “attempt to correlate” is something that assuredly DID happen.

“Reading the evidence shows that the impact of Spanish colonial processes generated a heated, pressurized, dangerous social atmosphere which penetrated the sixteenth-century transmission of indigenous historical and religious traditions to the extent that almost all of the available documents contain alterations in the picture of pre-Columbian life…it is clear that a thick Spanish, colonial Christian gloss has been brushed across the ideas, symbols, and dreams of ancient Mexican culture.”

Carrasco notes the example of a pre-Columbian storybook, and the same material “presented in European style prose histories…often with Christian polemics and interpretations inserted.” [12, emphasis added] Moreover, Carrasco notes that only 16 authentic pre-Columbian documents survive — the remainder were destroyed by the Spanish. (See Diaz and Rodgers, The Codex Borgia, Introduction.)

This fact alone renders all attempts to parallel Jesus and Quetzalcoatl suspect. Both Mormon apologists (if they desire) and pagan-myth copycatters have a great deal of work to do, and will need to find pre-Columbian sources that verify their contentions. As it is, they do not do so. They clearly rely overwhelmingly on the later “suspect” works of the revisers who tried to make Mesoamerican religion more “Christian” in taste.

To begin let’s look at the full set of parallel claims, from both sides; and oddly, it is the Mormons who make more claims, and find more parallels, in this case. Items italicized are claimed by both parties; items in bold, by pagan copycatters only; other items, by Mormon apologists I have seen only. The claims are that both Q and Christ:

Now to begin, a few of these can be dispensed with at once, in the same way they have for other “copycat” figures, as universals or typicals for any leading religious figure, or can be found in the doctrine or eschatology of a variety of religions, as would be expected under normal processes of development. But beyond this we will only select a few to deal with, pending our challenge for either group to produce pre-Columbian documentation.

This article was republished from Tektonics Apologetics with permission from the author.

22 Reasons All Scholars Agree Jesus Is Not A Copy Of...