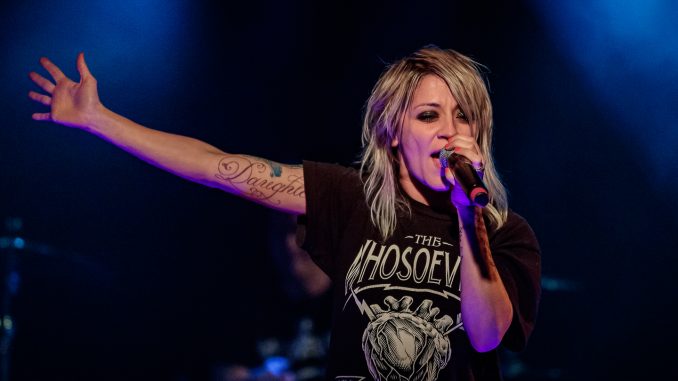 By James Bishop| Former atheist Lacey Sturm is someone familiar with pain and suffering. Perhaps for listeners of alternative music in the 2000’s the band Flyleaf will ring a bell. Their hit single, I’m So Sick, is telling in and of itself that there was a great deal of underlying pain (1).  Others may be more familiar with their other hit All Around Me.  The lead singer of these songs was Sturm.

When she was a teenager Sturm fell into a deep depression as she saw no purpose or reason for her life. She says that this was a direct implication from embracing atheism as a worldview, “When you’re an atheist, if life gets too hard, there’s really no reason to keep going…”

In chatting with Fox News Sturm explains that her childhood brought a lot of pain and trauma especially after an incident involving her cousin, “When I was ten-years-old, my cousin, who was about three at the time, was beaten to death by his stepfather” (2). This incident damaged any chance of her believing in God since how could a loving and all-powerful God allow such a thing to happen,

“My mother always talked to me about God, but at the time I just remember thinking I couldn’t reconcile how God could allow something like that to happen.” As a result in anger against God she became an atheist and ended up resenting Christians.

This was when she started to entertain thoughts of suicide. However, her grandmother, who recognized her distress and emotional trouble insisted that she go to church. But doing so was antithetical to Sturm’s nature since she had a generally negative perception of Christianity as well as the church. So why go to one?

She found Christians to be judgmental, full of intolerance and hateful. However, after her grandmother had continually insisted that she go to church Sturm agreed in order to silence her. But her plan for the day was rather straightforward. She would go to church, sit through the service, go home, and commit suicide.

However,  Sturm was taken by surprise when the pastor conducted a heartfelt sermon on pain and struggle in people’s lives. She had always thought of Christians as people who didn’t have real problems or know about struggle or pain but it seemed to her as if the pastor was describing exactly how she felt. It didn’t end there though as the pastor went on to describe feelings of suicide, and subsequently call out to the congregation for anyone with those feelings to come forward and be prayed for.

However, this took Sturm by such surprise that she felt the need to leave of which she did. But as she attempted to walk out she was met at the door by an elderly Christian man with tears in his eyes. The man took her aside and spoke kindly to her, sharing the message of Jesus’ love and how it could speak to and remove the pain which she felt inside. And, to add to her surprise, even though she had a negative perception of Christians she felt that man was wholly genuine and sincere, and thus allowed him to pray for her.

“In that moment,” says Sturm, “the day that I had planned to commit suicide, I realized this encounter with God was so much more real than anything that I’d ever heard from anyone… It was my own experience” (3).

His moment of prayer had a massive impact on her. She describes how the reality of her sin in the presence of a perfect and holy God became immediately apparent. But rather than condemnation it was God’s love, forgiveness and desire to restore her that she felt.  Thus, after experiencing a nervous breakdown she gave her life to Jesus (4), and thus did away with her initial plan to end her life, “When I met Jesus, when I became a Christian… I felt the love of God for others in a way I had never felt before. And to think that God’s message could go out in a way that so many people could hear it at the same time, to all of a sudden feel the love of God for each other-it’s overwhelming for me.“

Sturm has continued following after God and has dedicated her time and talents to the God she had found. However, becoming a Christian does not simply relinquish one’s pain. Christians suffer today in many ways just as Jesus and his disciples themselves did. Sturm realizes this but allows her struggles and strife to strengthen her faith.

Even in times of loneliness the singer is able to look to God in times of pain and suffering, “growing up without normal resources such as food, a place to live, then watching God meet those needs, it gives you a lot more faith than other people who have money in the bank and homes to go to.“

Sturm has come a long way since then. She has continued her music career, engaged in a number of projects, including work with Third Day which won her a pair of Grammy Nominations for ‘Best Gospel Performance’. She is now married and has children. She has also recently aligned with the Billy Graham Evangelistic Association, appearing in a video for the “My Hope America” project and opening for Franklin Graham’s sermons.

In 2014, Lacey published her autobiographical work The Reason: How I Discovered a Life Worth Living that highlights her struggles in life, her journey to faith and hope, and serves as an inspiration to those who are struggling themselves.

This is simply an amazing testimony. Although I think the empirical and eyewitness testimonial evidence for actual miracles, specifically miracles of healing, is hugely supportive of Christian theism, I think spiritual regeneration, the very work of the Holy Spirit Himself, is some of the finest evidence we’ll ever have.

Her song All Around Me displays articulates some of the regeneration and freedom she has received from Jesus:

“I can feel you all around me thickening the air I’m breathing, Holding on to what I’m feeling Savoring this heart that’s healing.  So I cry (Holy). The light is white (Holy). And I see you,  I’m alive.”

This article was originally featured in the website of James Bishop and was republished with permission.

Share4K
Tweet
Pin4
4K Shares
Enjoy this article? Take a moment to support us on Patreon!