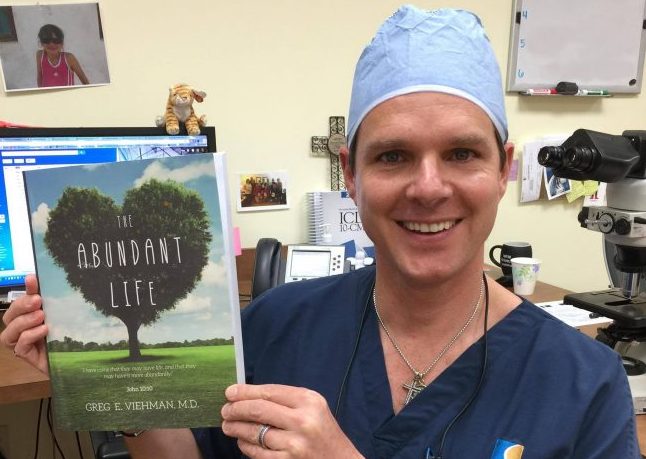 He completed an Internship in Internal Medicine at the Hospital of the University of Pennsylvania in Philadelphia, and a dermatology residency at Duke University Medical Center, where he was chief resident. Dr. Viehman completed his fellowship in skin cancer surgery also at Duke.

Dr. Viehman co-founded the Cary Skin Center in Cary, North Carolina, and worked there 1998–2008. He is now in solo private practice at SeaCoast Skin Surgery in Wilmington, NC. He has further lectured nationally on dermatologic surgery and authored several published scientific research articles (1). This is his story (2).

His story begins in his pursuit of materialistic pleasures, “I was going from one thing to the next. So I would buy a new car and when that didn’t do it I’d go out and buy new clothes, or take a trip. And then I went through hobbies. I did triathlons, I did running, I took up wine as a hobby, and on and on the list goes.”

Greg thus believed that he had achieved everything he would ever need to find happiness. He had the successful career, the lifestyle, however, it never seemed to be enough, “It was a combination of you’re sad, you’re empty, and at the same time you’re kind of angry and frustrated because you’re think, “Well why?” “What’s wrong with me?” “Why aren’t I fulfilled?” Why don’t I feel I have achieved what I’d worked my whole life for?”

So, you’re embarrassed, you’re not going to tell anyone so you keep it inside. Then what you end up doing is you end up taking it out on other people.” According to his wife, Ruth, “He was good but he had a short fuse, he was arrogant, he was always right, he’s the type of person [that is] his own person, he’s the boss. He always did well his whole life, he was always number one at everything.”

However, one day Greg felt annoyed at his neighbours who were Christians and he thus took it upon himself to get a Bible,

“I am going to get a Bible and I’m going to prove to them that they’re not practicing what they preach.”

So he started reading the Bible and it was then that things started to slowly change,

“I realized that Jesus was claiming to be God in the flesh, the God man on Earth and I’d never heard that before. So that quickly got my attention because I realized if it did happen then it was the most important event in human history and if it didn’t happen then it was just a religious fairytale that someone made up. So, I forgot about the neighbours and wanted to find out if this really happened.”

Being a superb doctor himself, Greg felt there was some common ground shared with Luke’s author, “I really got interested when I heard Luke’s prologue where he says he checked everything out because he’s a doctor and doctors would normally disprove miracles, not authenticate them.”

But at this time Ruth, unlike her husband, had already accepted Jesus as her Lord and saviour, “I was worried about his salvation. I would tell my friends at the Bible study that I was worried about Greg. He’s never going to accept the Lord, and when I told Greg that there is a place called hell and it’s real, and if you don’t believe you might go there. And I was praying for him, I really was. It got to a point where I gave up, I was like “God you really got to do something.”

However, as a result of his motivation brought on by his neighbours, after weeks of study Greg realized that Christianity stood or fell on one event: the resurrection, “I started to look for every possible explanation that would say it didn’t happen. Maybe Jesus didn’t die, well that wasn’t true even in the Journal of the American Medical Association doctors had concluded that Jesus definitely died.

Maybe the apostles stole the body, maybe they were seeing hallucinations; [there were] all these different theories but none of them were credible, none of them made sense. The only explanation from the historical facts was that the tomb was empty and he actually rose.”

The apostle Paul would prove to be one very compelling line of evidence in the larger evidential case for the resurrection, “The real thing that got me was the apostle Paul because here’s a guy who’s Jewish, he’s killing Christians, he has nothing to gain so what in the world made this guy go and be the greatest evangelist ever?

There was only one explanation and that was that he saw the risen Lord Jesus Christ. When I looked at the resurrection, looked at the evidence of these guys and their changed lives I said: I have to believe it.”

During this time of searching Greg, still making his rounds as a doctor, had a patient who totally unexpectedly asked him, “Have you accepted the Lord Jesus Christ as your personal saviour?” According to Greg,

“I just about passed out, I wasn’t expecting that, and all this other stuff was happening at the same time. So, I was like, how does he know? Why is he asking me this? Who is this guy? And I kind of just bolted out of the room saying I’d be right back because I didn’t know what to do.”

He began to self reflect since he really felt that things needed to change in his life, “There were things in my life that I wanted to change [such as] the anger, the frustration, but that I didn’t have the power to change. And so it all kind of culminated and I broke down crying and asking God to forgive me, and basically just kind of repented of my sins, and asked him to change me. I wanted to live a new life.”

However, the very next morning Greg noticed that something was different, “I was just like completely peaceful, I wasn’t frustrated, I wasn’t feeling angry, I felt content for no reason, so I expected everything to dissipate and go back but as I began to live out the day I realized, heck, there’s something really different.

So, if I was different and feeling completely different, I had to have been changed or something in my biochemistry of my body had to be changed. Maybe somehow my antihistamine got switched out for something like valium. So I went and checked my medicines and of course that wasn’t it.”

According to him his reading of the Bible assisted in answering why he felt so different,

“Basically what it said in there [Romans 6] is that when you become a believer and get saved and the Holy Spirit comes into you, which was something I was completely unaware of, that the old person who you were somehow dies. I then cross referenced that to Galatians 5:22 which talks about how the fruit of the spirit is love, joy, peace, patience, kindness, and I’m like hey that’s it! That’s how I feel, I got that list!”

Greg then told Ruth what had happened. According to her “It was a miracle to me because I didn’t ever think that Greg could change. He was suddenly concerned about other people which shocked me.”

He would then make it his mission to search for the patient who had asked him that unexpected question, “The problem was his name wasn’t on the schedule anymore. It was hand written in ink and I knew exactly what it was and it’s not there. I checked for the whole month and the guy basically wasn’t there. His record was completely gone, there was no evidence that he ever came into the office.”

According to his wife, “I feel like I’m married to a different person. I feel like my old husband is not around anymore and I’ve got this new husband who’s awesome.”

Greg leaves us with the following, “Every other religion is man seeking God. Christianity is God seeking man. There’s a real test for Christianity, you call on Christ [and] he won’t just forgive you for your sins but he’s going to change you right now that so you know that it is true. And that’s a big difference.”

Besides his medical occupation Greg does missionary work for orphans in Ukraine with New Life Ministries & Everlasting Strength Ministries, and enjoys collecting rare Bibles. Check out his website and book by the same name, The God Diagnosis. Also visit his Facebook page.

This article was originally featured on the website of James Bishop and was republished with permission from the author.

Share5K
Tweet
Pin7
5K Shares
Enjoy this article? Take a moment to support us on Patreon!

From New Age Blogger To Christian Ministry – How Jesus Revealed...