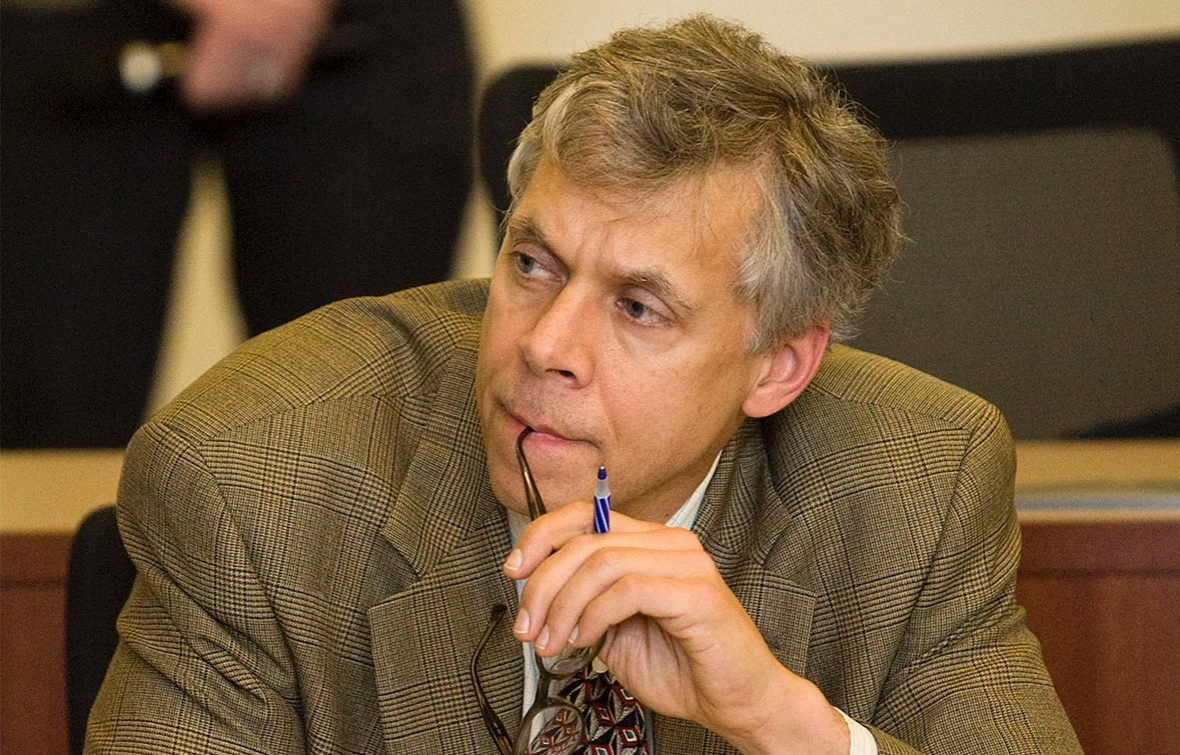 By James Bishop| Mark Bauerlein is an English professor at Emory University, Atlanta, USA, and is the senior editor of First Things journal (1). He also serves, in addition, as a Visitor of Ralston College which is a new liberal arts college in Savannah.

Apart from his scholarly work, he publishes in popular periodicals such as Chronicle of Higher Education, The Washington Post, The Wall Street Journal, The Weekly Standard, and The Times Literary Supplement (2).

His latest book The Dumbest Generation: How the Digital Age Stupefies Young Americans and Jeopardizes Our Future was published in May 2008. He recently co-edited a collection of essays entitled The State of the American Mind: 16 Leading Critics on the New Anti-Intellectualism published in 2015.

In his 30 years as a professor “of graduate seminars, academic conferences, committee meetings, lunches and dinners, and conversations short and long,” Bauerlein explains that he has “heard God mentioned rarely, and when he is mentioned he is never talked of in a way that assumes his reality.”

This didn’t bug him much at the time for he was himself an atheist who did not believe in God, “God was gone, utterly, and so was all spirit and meaning and moral value. If anybody had passed at that moment and casually remarked upon the morning with the slightest hint that it had a moral or metaphysical meaning, I would have answered, “That’s a lie.”” (3)

Bauerlein felt that his atheism was never out of place in the academic world, “Never did I feel out of place in my unbelief, and so, as the semesters passed, the roguish aspect of my atheism diminished. No more shock over the fact of mortality and no more self-promotion into an elite band of thinkers and seers, just an occasional shiver when alone and undistracted, plus a routine conviction that I was more educated and clear-sighted than ordinary people.”

Though Bauerlein was comfortable in his atheism, and certainly as an atheist who viewed religious belief as a delusion, he didn’t possess the vitriolic anti-religious mindset that some fellow atheists did, “I never regarded religion as evil or sought to disabuse the faithful.”

However, if he felt his atheism was challenged from a Christian it would still “easily spark a contemptuous response. I might admire the conviction of the believer and the good deeds of the church, and crisis-of-faith stories still had their appeal, but faith lay on the other side of a mental wall.”

This was because as a comfortable atheist he “didn’t sense the existence of God, and so I couldn’t understand the motive for religious expression as anything but ideological or subjective… I couldn’t reify God or contemplate God, not even from a skeptical distance. God was just a token abstraction.”

But there was a moment in Bauerlein’s life in which he admits having hope in God. He would stare out of his window at night and pray to God for help but he felt nothing ever materialized in response to his prayers, “though he hadn’t done anything for me. From that day onward, his being didn’t matter.”

From that day forth Bauerlein, expecting tension within his closer circles, hid his atheism from his peers and family, “In the subsequent weeks I walked around in a daze. I didn’t tell anybody about it, not even my identical twin brother, but went through my routines as before. I had a truth in hand: God is gone, and indeed never was.”

As an atheist Bauerlein had a keen interest for history and before class he would go down to the library to pore over the “Great Books of the Western World.” This led him to some prolific writers and thinkers of the likes of Aristotle, Dante, Bacon, Shakespeare, Rousseau, and many others. However, he was particularly fond of two well-known writers, Sigmund Freud and Friedrich Nietzsche, both of whom were atheists that vehemently opposed religion as well as belief in God,

“Most important to me was Freud—not his diagnosis of religious belief as an infantile longing but his list of defense mechanisms (sublimation, projection, reaction formation among them). They gave me tools to interpret every religious, altruistic, and in any way ideal assertion or action by others as merely a tactic of ego.”

These writers had convinced him at the time that “Moral and supernatural thoughts and words were just false and phony masks covering narcissism and fear. That believers would dress up their selfishness in grand and high-minded objects only worsened their dissembling. I laughed at the notion of a God who actually cared about me or anyone else. Against the prayers and hopes of the faithful I set a steely nihilism held with the ferocity of a late adolescent who has suddenly discovered the hypocrisy of his elders.”

But no matter how profound Freud and Nietzsche could be in their writings they couldn’t save Bauerlein from approaching despair,

“Every night in bed I foresaw my pending nonexistence and trembled.

I shut my eyes and the walls closed in. That I was destined to join the nothingness that I spied in the bush was an intolerable prospect, an unthinkable thought. My mind was stuck on eternal death,” “I can’t believe it, I can’t believe it, this can’t be happening.”

But unlike what some atheists would claim, namely how rejecting belief in God and religion is both liberating and desirable, “The discovery didn’t free me, it crushed me. The universe was open, but my life was closed. Others might take the disappearance of God as liberating, a chance to forge their own future, but not me. Whatever plan I might commence, whatever identity I might pursue, it shrank to pointlessness beside the yardstick of boundless nothingness.

I understood my atheism as an achievement, but it didn’t inspire any further achievements. My only creative impetus was to dramatize my own condition, my only critical one to despiritualize everyone else’s. I didn’t deny the good, the true, or the beautiful, but I certainly denied any supernatural grounds for them. All my strength went into demystification, and once those ideals became secular norms, they didn’t excite me.

I’d lost God, and whatever his replacement might be (helping others, making money) left me cold.”

Though Bauerlein was an academic, and a well-known professor in his field, it was not actually the intellectual component that so convinced him of his atheism. He says that “Arguments for it were secondary. Some atheists make moral arguments against faith (how can God allow so much suffering?), some make historical arguments (who was Jesus really ?), and some make political arguments (religion is the opiate of the masses).” However, he found that each argument offered, when he actually considered them, “could be answered in theory.”

Bauerlein is brave to admit and share with others that he regretted his many years as an atheist “for three decades afterward I felt it to be binding truth, but at fifty-three years of age, I now see it as error, an unfortunate one whose cost to me was an anti-spiritual, depleted existence through the prime of my life. The process worked incrementally and backward, not toward faith but away from nihilism, fueled by the rising conviction that the conclusion I had drawn long ago was wrong.”

Bauerlein married a Christian woman who, he recalls, would merely shrug at his atheist friends sly remarks about the Garden and the Crucifixion. At this time he worked in Washington, D.C. for three years under a man who was strong and taught everyone around him lessons in leadership.

This man did not appear to need God, and he operated smoothly in an often irreligious world of art, literature, and politics. But what interested Bauerlein was that this man was still a staunch Catholic who thanked God for the benefits of his life. Bauerlein realized that gifted men could also believe in God and be content in that belief.

Bauerlein also had a four year old boy who he took to Catholic services at the chapel on the Princeton campus, “I wanted him to experience the Church as part of his education in history and culture. The chapel is an imposing building modeled on the fourteenth-century English Gothic style, and the architecture did its work that day. So did the Catholic ritual. My son’s eyes kept rising up the columns to the vaulted ceilings and stained-glass windows.

When the priest and servers with their robes and candles passed by, he turned his head slowly to follow the procession step by step. When people lined up for Communion, he shed his customary shyness and pleaded to join them.

At that moment, my atheism turned into a sorry lack of sensibility, a lack that I refused to pass along to my son.”

As the years rolled by Bauerlein met and dialogued with many intellectuals who seemed to possess a robust faith. This not only included the man he worked under for three years but also an editor of a prominent political magazine, a historian who was a colleague of his at Emory University, and others,

“As the experiences piled up, the atheists I had joined no longer sounded so disinterested and broad-minded. I had accumulated several classic and contemporary statements of nonbelief, and as I perused them again, they seemed more and more to contract life, not expand it. I started to notice that they lacked the whisper of self-doubt that is more or less necessary to both sound religious and irreligious belief.”

Bauerlein, however, started questioning the works penned by some popular level atheists including Bertrand Russell, Carl Van Doren, and Richard Dawkins. The certainty that spilled from the pages of their book “reflected a limit in understanding converted into a virtue, compensated for with dismissal and annoyance and contempt. I understood this from the inside and began to wonder if, for all their claim to intellectual progress, many atheists suspect they are missing something from which other people receive meaning and healing and even happiness.

But even to say “I don’t understand you” acknowledges the limits of atheism and allows the possibility they might be wrong. It’s a difficult position for the intellectually proud to hold, and it is easier for them to denounce the believer than to admit that they don’t know. Contempt can be a sign of inadequacy, and envy too.”

Thus, shortly after Bauerlein found that his “atheism was an intellectual shortcoming, and a contradictory one” and even concedes that his atheism, of which he embraced at just 17 years of age, “was a psychological adjustment to a mentally ill, domineering father and an erratic, promiscuous mother.”

As of 2016 Mark Bauerlein is still a professor of English at Emory University.

Share7K
Tweet
Pin7
7K Shares
Enjoy this article? Take a moment to support us on Patreon!