Home Bible 5 Views On The Resurrection Of Jesus

By Brian Chilton| How do people view the historicity of the events within the pages of the Bible?

I have been reading a fantastic work by Alister McGrath called Christian Theology. On pages 309 through 313, McGrath discusses 5 ways that people during the past few centuries have evaluated the historicity of the miraculous biblical claims. The resurrection of Christ is the pivotal miracle as it most relates to the viability of Christianity.

1. The Enlightenment View: The Resurrection as a Non-event

David Hume claimed that any miraculous event was impossible to prove and impossible to believe because the event did not represent what was the normal operation. Anything that operated beyond the scope of those things that are normally observed could not be proven, and, therefore, could not be accepted as fact.

Gotthold Ephraim Lessing was more lenient than Hume concerning miracles. However, he still did not view the miraculous as something that could be demonstrated as history. Lessing noted,

“I do not for one moment deny that Christ performed miracles. But since the truth of these miracles has completely ceased to be demonstrable by miracles happening in the present, they are not more than reports of miracles…I deny that they could and should bind me to have even the smallest faith in the other teachings of Jesus.” [2]

Thus, Lessing, like Hume, did not accept the miraculous as a historical event due to Lessing’s belief that miracles did not continue to occur.  Suggesting that miracles hold no legitimate claim to history, Lessing felt that faith in the teachings of Christ was invalid. Lessing and the views of those in the days of the Enlightenment were extreme. A less critical view was held by Strauss.

2. The View of David F. Strauss: The Resurrection as a Mythical Event

David Friedrich Strauss, in his work Life of Jesus, notes the “central importance [of the resurrection] to the Christian faith.” [3] However, due to the Enlightenment criticism of the miraculous, the resurrection is best seen as a myth according to Strauss. Strauss believed that the resurrection was the result of the disciples’ “social conditioning and cultural outlook” [4] more than a recollection of a real, historical event.

Thus, while Strauss accepted that the disciples believed in some form of resurrection, the idea was more an allegory than an event found in reality. Strauss’ views would be picked up and expanded by a man who served as a predecessor to the modern, liberal Christian outlook: Rudolf Bultmann.

3. The View of Rudolf Bultmann: The Resurrection as a Mental Event

Bultmann, like Strauss before him, believed that miracles were impossible to accept in a scientific age. Miracles were not acceptable to modern, scientific minds according to Bultmann. Unfortunately, many accept Bultmann’s cynical prognosis. Because of this, Bultmann thought that the church must de-mythologize the Bible to keep Christianity relevant for modern minds.

Otherwise, Christianity would fade away in the halls of history. So what does Bultmann do with the resurrection, the pivotal event of the Christian faith?  Bultmann accepted the resurrection as a “mythical event, pure and simple.” [5] Bultmann denotes,

“The real Easter faith is faith in the word of preaching which brings illumination. If the event of Easter Day is in any sense an historical event additional to the event of the cross, it is nothing else than the rise of faith in the risen Lord, since it was this faith which led to the apostolic preaching. The resurrection itself is not an event of past history.” [6]

However, the message of the Christ continued. For Bultmann, that was the resurrection. Luckily, Bultmann’s beliefs did not represent all of Christianity. Karl Barth would legitimize the resurrection event where Bultmann and Strauss did not.

4. The View of Karl Barth: The Resurrection as a Faith Event

Karl Barth was amazed at the writings of Bultmann. Barth accepted the resurrection as a historical event. He emphasized the importance of an empty tomb, especially later in life. However, Barth did not place a lot of emphasis on the historicity of the resurrection event. Rather, he focused on the faith in the event which he thought was the emphasis of the early disciples.

Barth did not so much question the historicity of the resurrection as much as he questioned the historical enterprise. Could anything be accurately demonstrated as historical?

As McGrath notes, “Barth is left in what initially seems to be a highly vulnerable position. Concerned to defend the resurrection as an act in public history against Bultmann’s subjectivist approach, he is not prepared to allow that history to be critically studied.” [7]

Another individual would take the historicity of the resurrection to another level—Wolfhart Pannenberg.

5. The View of Wolfhart Pannenberg: The Resurrection a Historical Event

“History is the most comprehensive horizon of Christian theology. All theological questions and answers have meaning only within the framework of the history which God has with humanity, and through humanity with the whole creation, directed towards a future which is hidden to the world, but which has already been revealed in Jesus Christ.” [8]

So which of these approaches best works with the miraculous events of Christ and Scripture in general?

Bultmann and Strauss are children of the Enlightenment. The views of the Enlightenment, Strauss, and Bultmann all find themselves in some form of a Humean philosophical presupposition (that is, the idea that miracles cannot occur because they are aberrations to the norm—stemming from secular humanist David Hume). However, just because something does not ordinarily occur does not indicate that the event could never occur.

Bultmann, Strauss, and the thinkers of the Enlightenment think either that God does not exist (e.g., Hume) or that God does not interact with the world in miraculous means (implied by Bultmann and Strauss). Therefore, their ideology is rooted in an anti-supernatural bias.

For the record, Craig S. Keener has written a 2-volume work titled Miracles which reveals various modern day miracles performed in the name of Jesus. While miracles are not the norm, such an investigation divulges that they are not as uncommon as Humean thinkers suppose.

Karl Barth accepts the resurrection as a historical event. However, he exposes a critical weakness in his argument when claiming that such things cannot be demonstrated historically. Did the event truly happen? If so, then it stands to reason that the event actually occurred within space and time.

Paul argues that “if Christ has not been raised, your faith is futile and you are still in your sins…But in fact Christ has been raised from the dead, the firstfruits of those who have fallen asleep” (1 Corinthians 15:17, 20). [9]

Paul directed the attention of the Corinthians back to the reality of Christ’s historical resurrection. Much more could be said, but I have far extended the length of most of my articles. So, let us conclude by saying that Christ’s resurrection is a historical event. Therefore, it should be possible to examine the resurrection from a historical perspective. The same is true for most miracles in the Bible.

[1] The Enlightenment is a period lasting from the 17th and 18th century found mainly in Europe. The period focused on importance of human reason, claiming that human reason could explain all things. Miracles and the sort were viewed with great skepticism. David Hume, the great secular humanist, lived in this period.

[9] Unless otherwise noted, all Scripture comes from the English Standard Version (Wheaton: Crossway, 2001, 2011).

This article was originally featured on Bellator Christi and was republished with permission from the author. 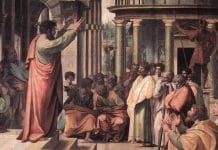 Science In The Gospels: 5 Mind-Blowing Facts